Dugong Or NOT Dugong…That Is The Question! 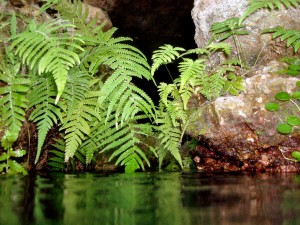 Flora above the cave entrance

The team is a bit shorter for today’s dive. Andy and I missed our team members terribly and decided we must continue onward! We were “wheels up” at 0745 on our way to Rock Springs with all necessary equipment on board. The park was even quieter this morning when we arrived than on Saturday. What a beautiful spring!! Motivated to explore the passage, we transported our cylinders to the cave entrance with haste.

Comments were made by both of us that the water always seems colder on the second day and we wondered why. 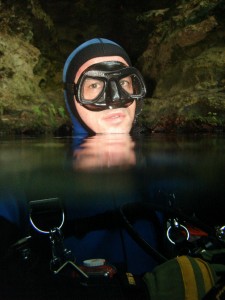 Andy refracts prior to the dive

At 0940 we descended and entered the cavern. Within moments Andy began to flash me with his light to get my attention and we both surfaced. Seems Andy had a low pressure hose failure and he needed to doff his equipment to get his spare regulator. Meanwhile, I took advantage of the time and snapped a few photos around me trying desperately to capture a very large dragonfly while he or she was “buzzing the tower” (my head)! Once we got settled we headed off again into the blackness. We got back to the 600’ “T” in 20 minutes, about 4 minutes quicker than on Saturday. A few moments were taken to catch the breath, drop a stage and regroup mentally for the next phase of the dive. Yesterday a discussion had arisen about weather or not being second in line down this high flow passage was any more easy or difficult than being first. I decided to put my opinion to the test and asked Andy if I could lead in this time. As always, he was very agreeable and off I went. The first 60 feet or so was difficult and required more muscle than usual for me but after that there was really no difference. 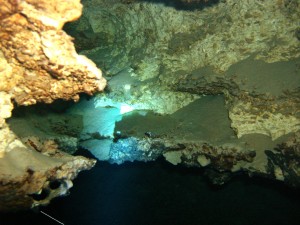 Exploring under the ledge

Wow! The view was spectacular from up there in front! I could see something besides silt and fins! In the future we might have to play “rock, paper, scissors” for the lead position!! Once back at the end of the “Tortoise Passage” Andy unstowed his primary reel and connected that line to the mainline. He sorted out the passage ahead then began to wiggle his way through a restriction right away. Some time went past before we moved ahead as he was studying the passage ahead. These restrictions can be a little tricky. They are generally extremely low and we have to make sure our cylinders are out to our sides and make our profile as slim as possible to get through them. Dive Rite has some great products that have helped us immensely with this! Andy dives a Nomad and I use a Transpac and the Travel Wing. 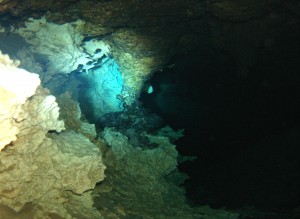 It’s crazy having to turn your head sideways to get through some of the really tight spots! A new cave is always fun to explore and today was no exception. White limestone is everywhere in the lower portions and darker limestone is on the ceiling and upper walls. Whenever we stop movement for some reason, say to make navigational decisions, I use the time to look for critters and other information to share with the team. Well…the time had come for us to turn the dive and we still had about 160’ of survey to do. The protocol is if you put in line, it has to be surveyed or it’s as if you were never there. Surveying took a bit of time in the high flow and tight restrictions. Andy gathered all of the data to include depth, azimuth, sidewall data at each station and the distance between each station. 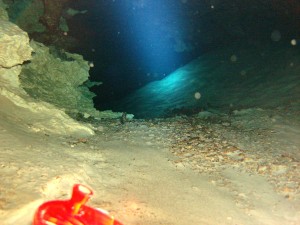 My primary job was to provide light for him to see and write. Visibility went to zero at times and it is difficult to see anything at all other than the faint glow of your buddy’s light even when close together. It is for this reason that we always have to know where our guideline is to the surface. When the visibility gets REALLY bad like it always does in this cave, we actually lightly circle the line with our fingers to maintain contact with it. Focus is primary when doing this type of work in these conditions. Once back at “the hammer” we swam a bit up the passage where Mike and Sandy explored yesterday just to have a look. After a few moments the thumbs up sign was given and we gathered our stage cylinder and turned the dive. Exiting is always fun because now we’re going WITH the flow! Just add a little buoyancy to your wing, let go and it’s a wild ride! 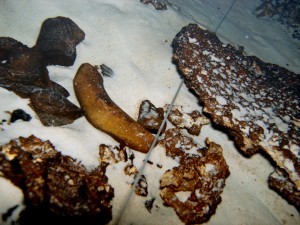 Arriving at our gear doffing rock on the surface after nearly 3 hours Andy and I rested briefly then started taking off cylinders and so on. We thought about reentering the water due to a smelly dead Armored Catfish somewhere topside. One of the park staff located it, skewered it, and removed it from the premises. Ewwww!

Thank you so much to Joe, Roxanne and the rest of the Kelly Park staff for allowing us to explore this beautiful cave again. We are honored to be there and amazed by its beauties and treasures. 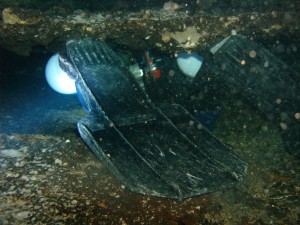 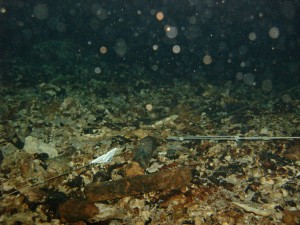 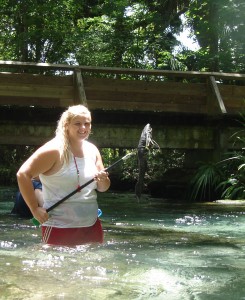 Park staff saves the day from the stinky fish! 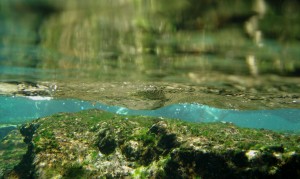