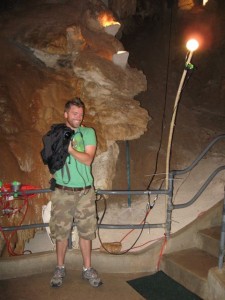 John 'Spielberg' Rife at work in his studio, or lair...

Morning came EARLY today as the two roosters outside of my bedroom were right on time with the 4:30 wake up call that I DIDN’T request. 🙂 Oh well, time to start the day!

We agreed to meet at Fantasy Cave at 8:30 to begin our first setup and broadcast tests going to and from the USA. Terrence went to pick up the tanks at Triangle Diving, and Annie transported all of our other gear (satellite dish, etc.) in the government truck. Most of the day was spent troubleshooting a few minor problems and preparing our educational program for all kinds of situations we may encounter while filming the interactive portion live.

Terrence and Jenny hit the water at about 1:00 and spent time working on lighting and audio issues related to the distance that this transmission is covering (underground and underwater from Bermuda TO Orlando and back). Phil headed down to BUEI (Bermuda Underwater Exploration Institute) to check out their technology on site, and the rest of us spent the day there at Fantasy. 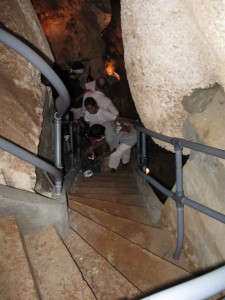 Looking down the stairs into Fantasy Cave

We managed to get in a full rehearsal before Terrence and Jenny got too cold (well, almost!). Several people joined us online today as our broadcast rehearsal went live on the internet, and their feedback was certainly helpful and appreciated! Glad to know our signal to the USA is so clear and fast!

We broke for a late lunch/early dinner, and Jenny, Carl, Terrence, and Amy headed to the Swizzle Inn for some much needed food. A pre-production meeting was held at 8:30 tonight at Clear View, and we think we have all of the details ironed out. A few minor things to confirm in the morning, and then we are LIVE at 2:00 (Bermuda time) for our 12:00 noon broadcast at Texas A&M Sea Campus Kids program in Galveston. A big thank you to Nancy Schultz and Sam Waltman, facilitators on site at TAMUG…hope you will join us! 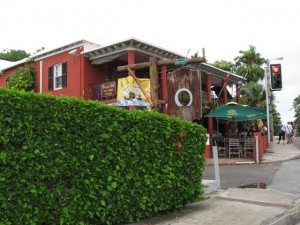 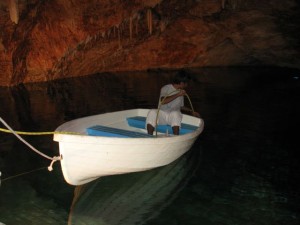 Rehan, captain of the SS Minnow, tending the umbilical