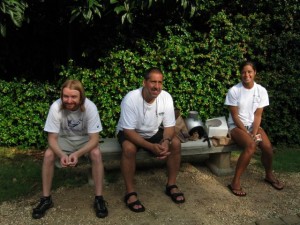 Jon (Jones), Carl, and Jenny...and their EMPTY box of doughnuts!

We woke this morning to a thunderstorm moving across Bermuda that brought with it a deluge of rain and thunder, which not only made scooter driving a challenge, but threw some logistical hurdles our way in terms of equipment setup and preliminary broadcast tests. Terrence and Amy hit the grocery store for a box of doughnuts and orange juice to everyone on our team…chocolate is ALWAYS a great way to start the morning. By the time we reached Fantasy Cave, the rain had stopped and the clouds were lifting.

Today’s broadcast was with/for Texas A&M University’s Sea Campus kids program. We had hoped to run through some initial tests with them prior, but we ran into a snafu with the satellite dish having learned that its satellite that was being used yesterday was relocated. 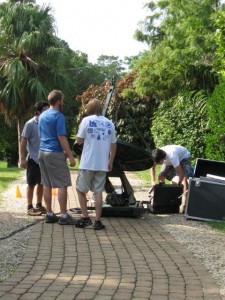 That problem took awhile to solve, and while the IntX team was troubleshooting, several folks from the Bermudian newspapers stopped by for a press meeting, along with Dr. Annie Glasspool, our liaison to the Department of Conservation Services. Mr. David Summers, President of Fantasy and Crystal Caves stopped by for a visit as well, and we are very grateful that he is allowing us access to this beautiful system for a truly one-of-a-kind opportunity.

Ironically, the satellite established contact 30 minutes prior to the designated broadcast time, and we hit the ground running! Carl, Jenny, and Terrence jumped into their gear, Rehan into the boat (where he is manning the umbilical), the IntX crew went into full production mode, and wow…it was a busy place (if only we had a hair and makeup crew on this set – ha!!). Although we had difficulty with receiving audio communications FROM Texas, everything else went smoothly, and several folks joined us online for the tour of Fantasy Cave. I don’t know where we would be without Carl Saieva’s gift for literally creating and fixing anything and everything electronic ON SITE with a rubber band, a piece of string, and a bug…he is amazing! 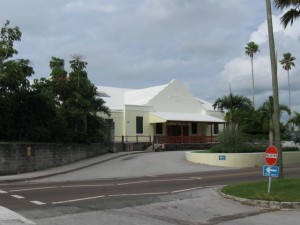 After the broadcast, Terrence and Jenny went to get tanks filled, Amy and Jon Jones headed for the Bermuda Aquarium, Museum, and Zoo for a meeting about upcoming broadcasts, and the IntX crew headed for a well-deserved shower! We had been invited to speak and have dinner at the BSAC meeting tonight (British Sub-Aqua Club). They provided us with a great chance to meet some local divers, enjoy some homemade chowder, and share a bit about both of our organizations and how this partnership came to be!

Hope everyone will join us tomorrow at 10:30 am (Bermuda time – one hour ahead of EDT) for the next broadcast. If you don’t already have a login access, please visit www.intxinc.com for more information on how to login and join us online! Also, watch for the archived broadcasts on the same webpage. 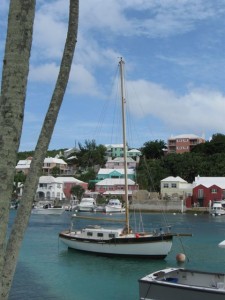 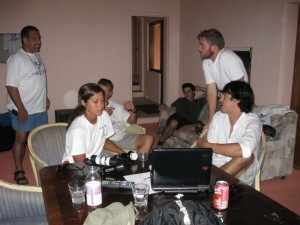 Watching the broadcast after it aired 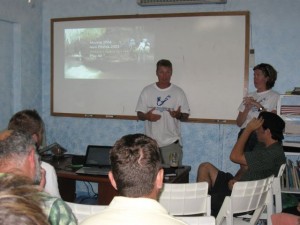 Terrence and Amy speaking at BSAC