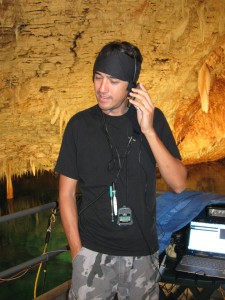 John 'Wireman' Nelson keeps us on track for time!

August 7, 2008
We woke bright and early this morning to meet at Fantasy Cave at 7:00 am; though, today is the FIRST time the rooster outside of Amy’s bedroom window decided to sleep IN!  Our broadcast host venue today was BUEI – the Bermuda Underwater Explorers’ Institute).  After a nearly flawless satellite connection and rehearsal (whew!), we went live at 10:30 am.  Shortly after the broadcast began, we were joined on site by several summer camp students from the BAMZ (Bermuda Aquarium, Museum, and Zoo), and it was fun to have them in the cave with us!
Terrence, Jenny, and Carl tried a few new passages this time, and spotted some new critters (captured one live during the broadcast), new formations, and interesting habitat.  We were very grateful that today’s dialogue with Terrence was possible, though there was still a bit of a delay between the student off-site and him underwater.  Hopefully we can reduce that in the days to come.  The students at BUEI asked a lot of great questions, as did our guests in the cave and online, and about halfway through, we welcomed a tour group of about 35 people…so it was packed!  Great!!
After the broadcast, the IntX crew headed out for an afternoon of relaxation and computer work while Jenny, Terrence, and Amy went to BUEI for a hands-on follow-up workshop with the kids that participated in the broadcast. 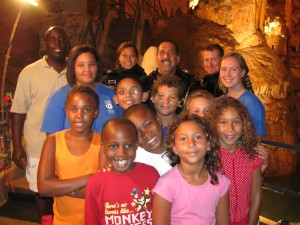 BAMZ students join us on site! Thanks Joe!

We spoke to a group of about 50 campers there, and spent a lot of time laughing and learning about the intricacies of cave diving and what makes Bermuda’s cave habitats so unique.  Many thanks to Crystal and her students for such a wonderful visit!  We enjoyed your company!!  We head back there on Tuesday, the 12th, for our evening presentation with IntX.
Carl spent the afternoon at Triangle Diving troubleshooting a problem they were having with their compressor, and as soon as we all reunited, he started a game of “Let’s see who I can throw off the dock”….Jenny went first, Terrence went voluntarily after a bit of dragging, and then Amy got tossed…  So, we all went to the Swizzle Inn for dinner in soaking wet clothes and froze in the air conditioning.  Gil and Dane (Triangle Dive Shop employee), and John Nelson also accompanied us, but enjoyed the luxury of warm, dry clothes! 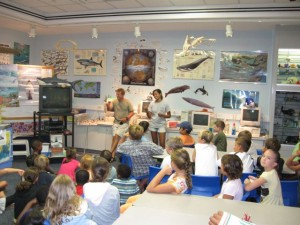 Terrence and Jenny at BUEI workshop after the broadcast

We ended the evening with a stop at Clear View for a discussion about tomorrow’s broadcast – get ready Orlando Science Center oceanography campers – you are next! 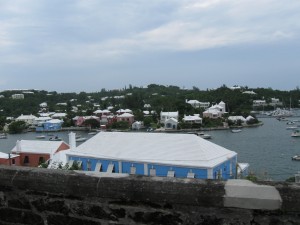 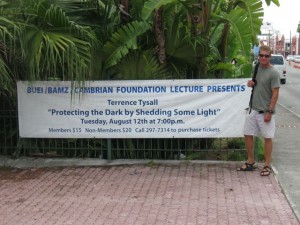 The banner advertising our upcoming presentation at BUEI