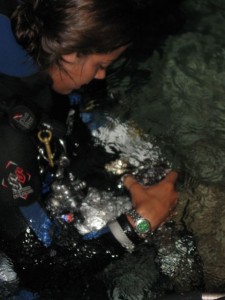 Jenny getting ready for the dive 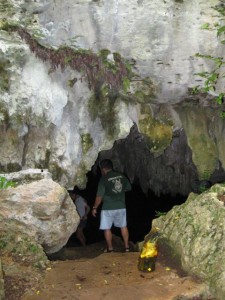 Carl at the other Walsingham entrance

We began our day today at 6:00 am heading for Clear View to meet Carl. Once there, we programmed Terrence’s equipment and readied it for deployment into Walsingham (a different entrance). This required a bit of a hike through Tom Moore’s Jungle, and Jenny and Terrence hit the water at 9:00. Carl and Amy explored around the jungle a bit and visited with some locals while they were on the dive. After a successful deployment, we all headed to Triangle Diving to get rinsed off and then to the Swizzle Inn for some lunch. 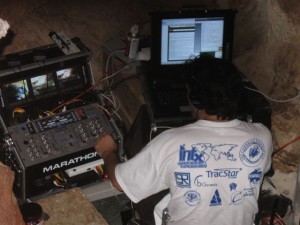 Alex's mixing board up in the ceiling

Today’s broadcast was to the Orlando Science Center’s Scienterrific Saturday, and the dive crew needed to be on site by noon. Gil joined us today since he will be tending line on Monday night after Jenny and Carl leave. Everything about the broadcast seemed to go so well on our end in that Terrence could actually hear the questions coming to him very clearly; however, we weren’t aware that OSC had lost feed periodically or that it was difficult hearing Terrence. We need to make sure that information gets communicated to us immediately via chat so that we can modify settings on all of the electronics.

We want to thank our Cambrian Crew at the Orlando Science Center who put on a series of workshops to teach the public about cave diving and exploration! Thanks for the added support and educational information! Bob, Kris, Renee, and Marissa – it was great to have you
there, and thanks again!! 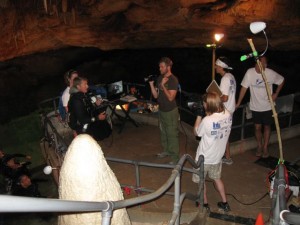 The production crew during broadcast

When the broadcast ended, we made a quick jaunt down to Crystal Cave – the sister cave to Fantasy – so that Carl, Jenny, and Terrence could investigate a couple of potential leads. Again, Carl came back amazed at what a beautiful dive it was! Then, the four of us did a cavern dive in Crystal so that Amy could see what this place was like underwater…and it was really, really pretty. Amy only had a 0.5 mm wetsuit on, and in 70 degree water, it didn’t take long to freeze…but what an opportunity! This makes dive #4 for Terrence and Jenny for today – whew!

Gil and Pam invited everyone to dinner at their house tonight, and we had a lovely picnic outside – even with a bit of rain. There was lots of laughing and giggling (Mosquito Jen!), and the food was excellent!! It is fun to relax, and we are all looking forward to our day off tomorrrow. We will be sad to say goodbye to Jenny and Carl and Phil – all of whom are departing Bermuda on Sunday. In the afternoon, we will join Graham on his dive boat for a trip out to North Rock! 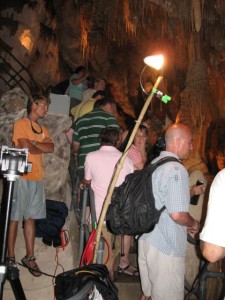 A tour group that joined us for the broadcast 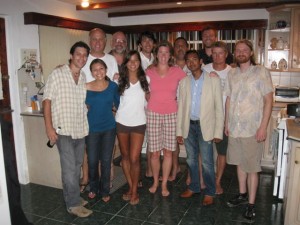