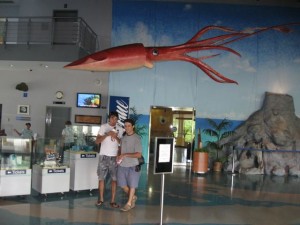 John and Alex enjoy some ice cream at BUEI

This is our last broadcast day from Bermuda, and tonight – at 10 pm our time – we did our broadcast with Moody Gardens Aquarium in Galveston, TX. We had a leisurely day of running errands, filling tanks, and relaxing a bit. The IntX crew spent some time at the beach while Terrence fixed the lights on his scooter. We met in the afternoon for a pre-broadcast meeting and to discuss the plan for the evening. After the meeting, Alex, John, Terrence, and Amy headed to BUEI in Hamilton to test out the A/V equipment prior to our meeting there tomorrow night. 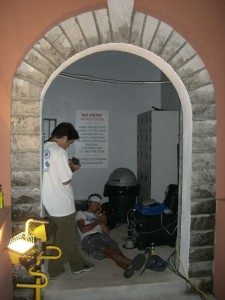 Alex and John troubleshoot before the Galveston broadcast

We headed for Fantasy Cave around 6:00 pm to begin setup and run all of the necessary tests. It was a very LONG evening because we had trouble receiving a signal for the satellite. There was thick cloud cover, and the staff at Fantasy even brought a set of outdoor lighting to assist with the assembly of all of the equipment topside. We were just debating about what time to call it off when we received a signal, and we scrambled to get the last minute things in order! Again, within 15 minutes of that signal connection, we were ready to go – yea team!! Thanks for your patience, Galveston!!

The broadcast went sooo well and sooo smooth! A big congratulations and thank you are in order to Jennifer Lamm (Moody Gardens) and Sam Waltman (Cambrian Foundation/TX) for selecting an excellent location – their IMAX theatre – for their audience participants! The picture was so clear and the sound was amazing! Terrence said that even though he was 70′ underwater, 300′ back in a cave, and 122′ underground, AND IN BERMUDA, that Galveston sounded like they were right up on the surface where our broadcast team was – AWESOME!!! About 60 people attended in Galveston, and we had a number of folks joining us online – including Carl and Jenny – who had been here for the prior broadcasts! It was nice to have so many methods of communicating during the broadcast! Thank you, too, to the staff at Fantasy/Crystal Caves for providing security and lighting topside while we were down in the cave! We returned to the surface in a downpour, and we learned that it had been raining like that the entire time we were broadcasting – so we were very glad that satellite had locked on to our dish prior to the bad weather! Whew! 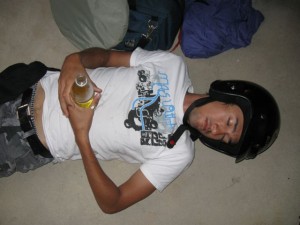 We packed up the essentials at the end of the broadcast and headed for home…time to get some zzzzzs before packing/shipping tomorrow! IntX has 900 pounds of gear to get ready for shipment back to the US. 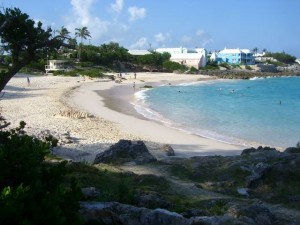 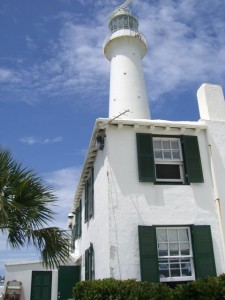 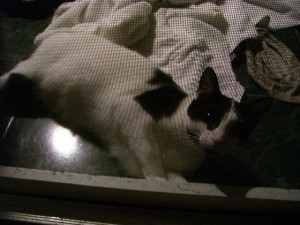