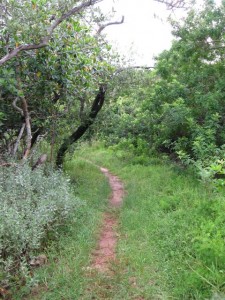 The trail to Walsingham

Today is our last day in Bermuda, and there is lots to do! If I didn’t know any better, I would think we were in Seattle…the rain was coming down in buckets all morning long. Terrence, Gil, Amy, and some local divers headed to Walsingham to retrieve some instrumentation. Amy collected the equipment after the dive, and then met up with the divers at Deep Blue. After the dive, we hauled all of the gear out in the pouring rain and made a quick dash to Fantasy Cave to begin packing up the broadcast equipment. Once everything was loaded onto the truck, we met back at Clear View to begin packing and to talk about the evening presentation at BUEI.

John Nelson was making plans to deliver their two large pallets to Bermuda Forwarders, which is where Pilot Air will pick it up for transport back to the United States. Terrence and Amy returned to Gil’s house to shower and get ready for the evening presentation at BUEI. Some of the IntX crew headed for the beach, but were suddenly ‘called away’ when BUEI notified us that they wanted us to arrive earlier than planned to re-test our equipment since they had had a technician come in the day before to fix one audio problem we were having. 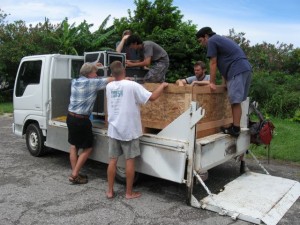 Packing up the IntX gear

We all met at BUEI around 4:30, and John Rife and Alex met us on site. Everything seemed to be working just fine, and the guests started arriving around 6:30 for cocktails prior to the 7:00 presentation. Annie gave us a very nice introduction, and Terrence led off the speaking crew highlighting both his graduate work and the history of the Cambrian Foundation. Amy then explained to the audience how this project came to be, and what our partnership with IntX has allowed us to do with our Human ROV experience, and how that has long been a dream of ours. Then, we turned the stage over to John Rife who discussed the technology that made this whole broadcast experience possible! We ended with a Q&A session, and a lot of laughter in the audience…it was certainly entertaining! Dr. Rosalind Howard – a UCF professor who is just beginning anthropological research in Bermuda – was also in attendance. 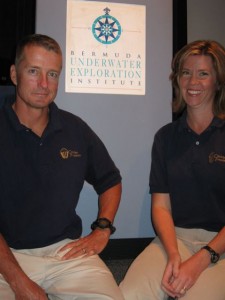 Terrence and Amy at BUEI

After the presentation, we were off to Rosa’s Cantina in downtown Hamilton for a dinner! We had plenty of time to wait for our table and our dinner, and we filled the time with lots of laughter and visiting! Thanks Gil and Pam! 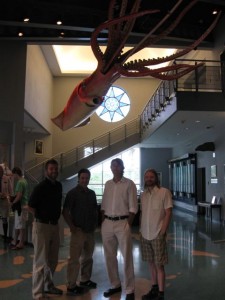 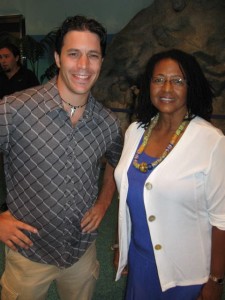 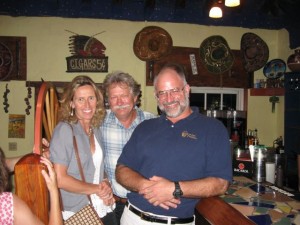 Annie, Jack, and Gil at Rosa's 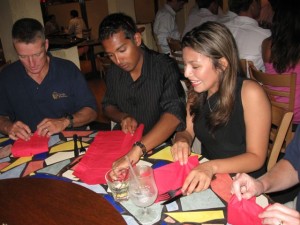 Terrence, Rehan, and Yami work on their 'dinner origami'