Not for the claustrophobic! 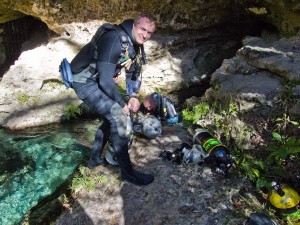 Rock Springs belched today…meaning the outflow of the spring was huge, you might say gigantic…enormous evennnnn….

First order of business was to build a fire…it was in the 40’s when we arrived at the park and with the help of the “parka’d” park staff, we were able to start a warming fire inside a metal trash can. While crude, it sure did the trick in warming hands, feet and other body parts as we began to consider the sacrifice we would soon offer the spring gods… 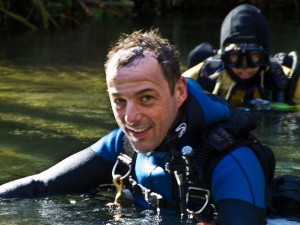 Karl & Bob entered first with a mission to take photos to help illustrate the beauty & complexity of this cave system to those less fortunate than us…and it wasn’t long before Karl was wondering what he’d gotten himself into…with 3 bottles of gas and photo equipment it was very difficult navigating against the flow (with only one free hand to crawl along the bottom of the cave…nonetheless, amid the struggles the beauty and clarity of the cave revealed itself and called upon us, much like the sirens of Greek mythology. After 15 minutes of hard swimming, we finally stopped to start our photo shoot. As you might expect, movement & communication between photographer & model can be difficult in the high flow and sometimes turbid environment…but with patience (and of course extreme skill), we were able to share some of our experience with you. 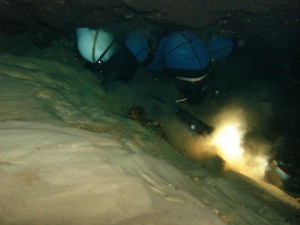 Pushing through a restriction

We continued on, with several stops to illustrate the unique geology of this cave…we arrived at the T-Junction (the Hammer) and attempted to wait for team 2 to arrive behind us.

Meanwhile, back at the mouth of this monster, Renee and Andy entered with a mission of doing a little more exploring in the outer reaches of the system … and to collect isopods & amphipods. They set off on a quick swim upstream to find Karl & Bob (knowing that their photo session awaited!). 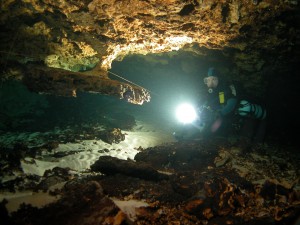 Deep inside the belly of the beast, Karl & Bob were having difficulty remaining in one place due to the extreme amount of flow…they decided to vacate further downstream, where they might be able to operate more efficiently…just a they turned to head downstream, beacons of light approached, signifying the arrival of our next set of models (Renee & Andy). At the same time, an equipment malfunction with the camera rendered the flash inoperable … at the most inopportune time. However, Andy & Karl were able to resolve this issue on site, yet with 4 people in a high flow low passage, pictures now seemed an impossibility as visibility was rapidly declining. The two teams metaphorically “passed the baton” and went their separate ways. 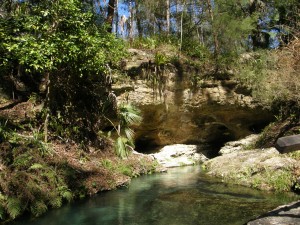 Andy & Renee commenced their way, major restriction (a place where two divers can’t pass together) after major restriction, to the end of the line placed in 2007. The flow was extreeeeeemly strong making one think they were not welcome. Once at the Vermiform Appendix passage, they stopped to do a bit of line maintenance. It seems that at some point between their last visit to this area and today, there had been a collapse in an area that already was very low. The ledge fell down on top of the line causing a bit of a line trap! Renee, anxious to conquer the chattering monkeys (the “voices” suggesting she be afraid so she can’t focus) in her head, took her reel and connected the exposed lines once creating a continuous guideline to the surface. 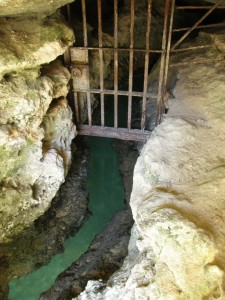 Meanwhile, the cave gods were not yet ready to release the photo time…not 75 feet from the entrance of the cave, in the last restriction of the cave, the beast reappeared…grabbing Bob’s stage tank and wrapping the line around the valve and neck of his tank…in near zero visibility Bob worked to free himself from the line and the restriction and with the assistance of Karl, was able to free himself of the entanglement. The Rock Springs gods were now satiated and allowed us to exit the mouth of the cave…with unusual force of course, just to remind us who was boss.

The cave gods now turned their attention to Team 2….”Renee…stay, you can’t go!” At about 1100 feet into the cave, Renee apparently decided to camp out in a particular restriction and she created an obstructed appendix!! She had some time to think about all sorts of crazy things while the cave seemed to be chomping down on her. After what seemed like forever, Renee finally slithered through and emerged on the other side in a larger area. She turned to Andy needing a hug and he offered the ok sign instead and waited patiently for her to regroup. Onward they pressed another 100 feet or so to the end of the line. A bit of time was spent attempting to push even farther into the appendix but alas…she walled out…for now. After about 2 hours and 15 minutes Andy and Renee turned to exit. Andy collected some macrofauna along the way while Renee took some photos. There was more restriction fun to be had during the exit but this time in zero visibility. That’s always fun…or not. 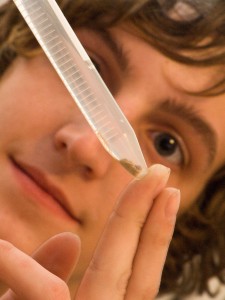 Once on the surface the teams were greeted by some park visitors and shared with them some cave lore at their request. It was much warmer today which made for happier changing out of wet suits! Everybody caravanned over to Seminole Scuba for some of their wonderful gas fills!! Thank you again Laura and Bill! Tomorrow the diving continues up in north Florida. Thank you Rhiannon and Andy for letting us descend upon your home.