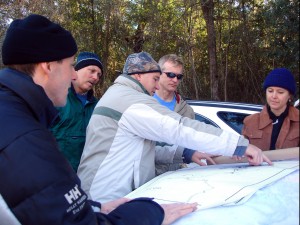 Briefing with the cave map

It was another brisk 36-degree morning as the team arrived at Rose Sink in Columbia, Florida. Overall the objectives at Rose Sink today were to recon possible sites for future bacterial collections, photo documentation, distance marker placement and macrofauna collection. These objectives also provided opportunity for better cave familiarization. A warm welcome to Mike and Sandy Poucher who have joined the team today! 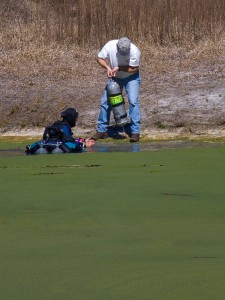 Andy and Sandy began the day’s diving, heading up the main line approximately 800 feet to the beginning of the drop into the deep section and a gorgeous fissure room dominated by a massive blade of limestone that descends from the ceiling. Visibility was extremely good, allowing us to really appreciate the size of the cavern and passage features. Andy snapped some photos of Sandy in the blue spring water of the large room. We swam back up the line, meeting Mike and Renee measuring markers and a little further on, Karl and Bob. Andy took a few photos on the way back out of the main tunnel. At the cavern we recalculated thirds and swam up the upstream past numerous small feeder springs to the second opening. Andy again snapped several photos of the second opening. Bacterial debris continues to be a dominant feature of the cave and much of the basin life appears to have disappeared, although several cave crayfish and cave amphipods were observed during the dive. On the way out Andy took a few final photos and we had a short decompression before exiting the duckweed-covered pond into glorious warm 70-degree Florida sunshine! 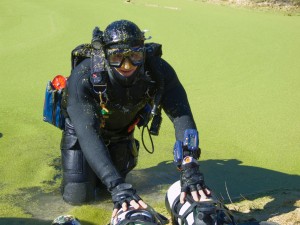 Creature from the green lagoon

Looking at the basin from above and below is quite neat because of the thin duckweed layer covering the surface. From the surface, the basin looks a giant, irregular billiard table with no apparent depth. Underwater, the duckweed creates a ceiling with beautiful green glow. As you ascend, exhalation bubbles part the sea of tiny green plants, opening a clear window above you. Enter and exiting becomes a challenge because duckweed adheres to everything and finds its way into every nook, cranny and crevice. At least it adds a pleasant green to the otherwise dark dive gear. 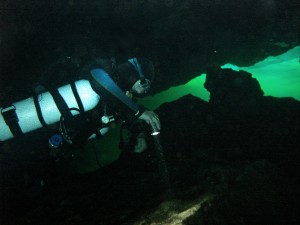 Bob passes the main entrance headed to the upstream section

Second into the cave were Mike and Renee. They had the task of placing distance markers downstream every 100 feet. This was accomplished using a tape measure for accuracy and pre-marked white line arrows. Markers were placed to assist with today’s and future collections as it is important to know the location of specimens within the cave. It was noted that several of the markers were already in place to 700 feet penetration and 110 foot depth, which is where the team turned their dive. Mike and Renee turned the dive then began to look for bacterial mats and macrofauna and both were plentiful! Of particular interest in the downstream was an alcove on the left wall (going in) at about 50 feet just before the first fissure room (p. 200 ft.) and a second small alcove near the floor on the right side of the passage (going in) just as you drop to the 90 foot level from the first fissure room. Back at the cavern, they recalculated their gas supply and entered the upstream section. It became quite clear this is a treasure chest of all kinds of interesting things! At the 300’ marker and nearly straight up was another opening that provided a portal for the surface sunlight. The sunlight illuminated the eeriness below casting shadows of organic debris on the silty bottom. 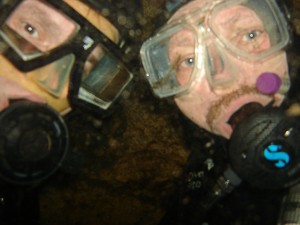 Third but not least

Third, but not least, Bob and Karl entered. Their plan was mostly familiarization, along with searching for bacteria and collecting macrofauna. A secondary goal was getting out of the spring without duckweed. They entered the cave and headed downstream. Their mission quickly changed from trying to figure out where to find bacteria to trying to figure out where not to find bacteria. At about 350 feet back, they tied a reel onto the main line to explore across a large room, finding exceptional concentrations of bacteria on the far side. First Karl, then Bob, spot cave crayfish and observed how extremely good they are at eluding capture. Purely coincidentally, they determined there was no compelling scientific reason to capture any (that’s their story and they’re sticking to it). Upon reaching a maximum depth of 90 feet, they head back up, passed the entrance and explored the shallower, upstream side. They found it had even denser bacteria concentrations as they swam to the Rose Creek Swallet, a smaller sink just slightly to the north east of Rose. They finished the dive after several minutes of safety decompression, at 60 minutes. Upon reaching the surface, they did something previously thought as impossible as accelerating to the speed of light. To accomplish this, they tested the hypothesis that surfacing and exiting where there wasn’t any duckweed on the surface could lead to a sans-duckweed egress. Their success lends considerable support for their theory. 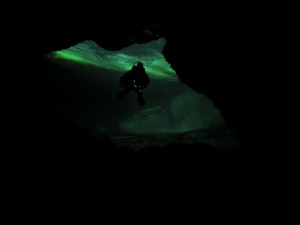 Dr. Franklin and her colleagues are investigating the food web dynamics of these springs/caves, and in addition to surveying bacteria, we are examining the invertebrates that live here. It is believed that in areas where there is no organic input to the system, these invertebrates (isopods, amphipods, crayfish, copepods, etc.) are utilizing the microbial colonies as a food source. Because these ecosystems are functioning in areas devoid of sunlight, these relationships are particularly unique and interesting from an energy transfer perspective. In addition, we coordinate our invertebrate surveys and sampling with several experts who study the abundance and distribution of these organisms in caves all over the planet. Our data thus far have revealed one new genus of amphipod – which was previously unknown to science – and several new type localities. There is a lot to learn about what is happening under our feet in this underwater highway that is our aquifer. 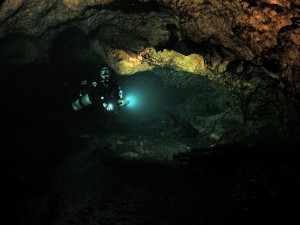 Sandy on upstream side

Thank you to Rich and Cheryl Courtney at Cave Excursions East for donating gas fills for us during this project! We were able to also pick up a few needed items such as an oxygen hose and some clips because they’re so well stocked with goodies!! 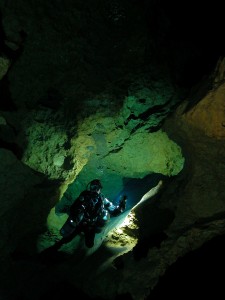 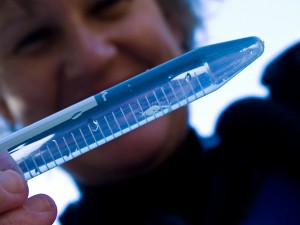 I think I'll name him Spot 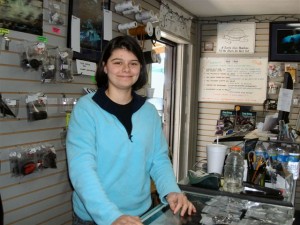