A Hotel for Catfish? 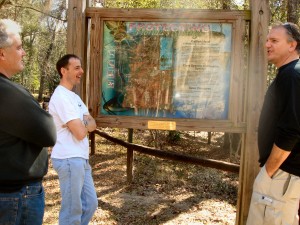 Mike, Andy and Mark chat about the park

FINALLY a warm day greeted us upon arrival at Manatee Springs State Park. Manatee Springs is located in Chiefland, Florida, which is southwest of Gainesville. This is a first magnitude spring which means it discharges at least an average of 100 million gallons of water daily!! The watershed that contributes water to Manatee Springs encompasses an area about 40 miles away from the main spring. Rainfall that lands in this catchment basin is rapidly transported through the porous limestone bedrock and emerges at Manatee Springs. Why is it called Manatee Springs? Well, the obvious and correct answer is because there are manatees! Mantees reside here from November through April because the water is warmer here (72 degrees Fahrenheit yearround) than in the Suwannee River and the Gulf of Mexico. The spring run meanders through cypress, tupelo, and other wetland trees and ultimately joins the Suwannee River. 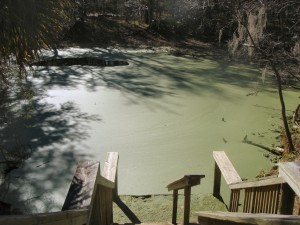 Logistics is the name of the game today. The divers paired up in two teams and entered at Friedman’s Sink which is upstream from the main basin, Catfish Hotel. Guess why it’s called that!! We had to drop all of our gear off there (and Kyle to watch it!), drive our cars to Catfish, and then walk back to Friedman’s. Mike, Mark (Kyle’s Dad), and Renee couldn’t find the elusive trail through the woods, and decided to walk the road instead. In drysuits, it got a bit warm. Some park staff happened by in one of their little trucks and offered a ride. Wasn’t it nice that they offered water to the rest of the team as they drove past them?! Hee hee!! 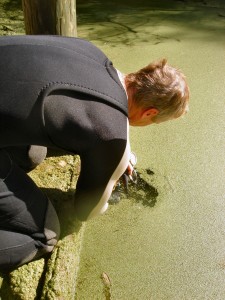 Andy, Sandy, and Karl were the first team in the water, slipping down the tube into Friedman’s Sink. Andy entered first and positioned himself in the cavern to photograph Sandy as she descended. Sandy then took a position with the strobe to light Karl as he entered the cavern. The team proceeded upstream, heading for the Pillar Room. Flow was slightly down and the visibility was great, allowing the team 70+ feet of visibility. Sandy turned the dive about 700 feet upstream and the team enjoyed a pleasant dive with the flow downstream, stopping periodically for photographs in the Pillar Room and along interesting features in the main passage. Manatee Springs is known for large passages, sand floors, and very dark walls from tannic water and bacterial growth. The dark walls make photography particularly difficult, as the dark coloring absorbs rather than reflects light. Particulate can also be a problem in Manatee, as the divers and the flow stir up particles of silt, bacteria, and other debris with bubbles and fin kicks. As this material floats through the water, the light from a photographer’s flash reflects off these particles, creating backscatter and obscuring the photograph. The team paused under beautiful Sue Sink for a few photographs in the cavern that underlies this karst window. The team exited and Andy took a few photographs of Karl in the basin among the logs and small fish. 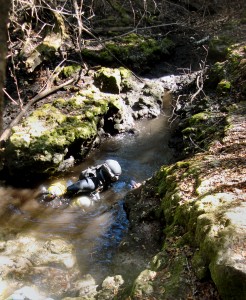 Meanwhile, Mike and Renee were rigged and ready to drop down into the main passage. Renee likes small passages so she’s in Heaven! Imagine descending feet first into a dark fissure with rock on all sides. Sometimes the scuba cylinders will get temporarily trapped, and so they have to be negotiated carefully. It’s a straight drop with the white line barely visible in front of you as you control your descent. After a minute or so, the main passage is evident because the passage is big and the flow is high! Mike and Renee chose to go downstream just a bit and jump to the Chaulkey Bypass. The line to this passage begins about 30 feet away from the main line. In order to maintain a continuous guideline to the surface, Mike tied on to the main line with his reel and swam to the Chaulkey Bypass line. Renee followed, and off they went. Soon the same procedure was done and they jumped to the Sewer Tunnel. Guess why it is called THAT??? Well, surely not real sewage, but it was nasty none the less. Lots of “stuff” floated around in the water reducing visibility at times. Cave crayfish, amphipods, isopods, and bacteria were abundant! After turning the dive, Mike and Renee took their time exiting. Renee went first and Mike collected his reels behind her so they both were always on the line. (That’s the way out! Popcorn doesn’t work well!) Mike pointed out several spots to find bacteria and lots of critters! Cruising out with the flow was fun and was certainly easier than swimming against it in the smaller passages. 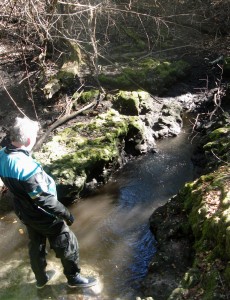 As Andy, Karl, and Sandy were ending their decompression, Renee and Mike exited the cavern to begin theirs. They waved “hello” and exited the duckweed-covered water. Kyle and Mark were invaluable at the end of our dive, assisting by taking gear and helping as the team exited the water. During deco, Renee seized the moment and snapped a few photos. The view from 15 feet on a big submerged tree was outstanding! She enjoyed watching her exhalation bubbles float up to the surface popping into the air above. What a great dive for everyone, and mission accomplished! 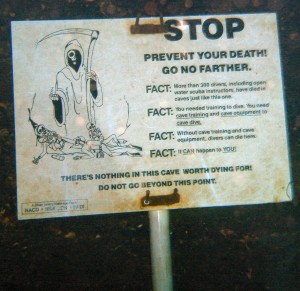 Do not go if you’re not trained!!!

After everyone was dry, we debriefed over some grilled hot dogs. Mmmmmmm!!! Mike presented a copy of the Manatee Springs map to Kyle that was signed by some of the explorers, including our own Andy, Sandy, and Mike. It was such a pleasure to have Kyle with us during this project. We wish him success in his journey to be a marine biologist and welcome him back anytime. A big thank you goes to Mark for supporting Kyle in his efforts as well as lending us a hand or two!

This project would not have been possible without the help and support of Bill and Laura at Seminole Scuba, and Rich and Cheryl at Cave Excursions East who donated gas fills for the entire project. The staff at Kelly Park continues to let us explore in their park and kept us warm on the coldest day of the year! 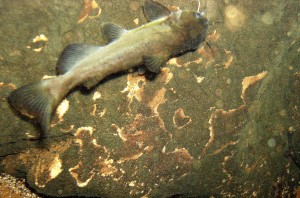 A catfish at the hotel

The springs in District 2 (Rose Sink and Manatee Springs) were new to our permit this year and provided us a chance to evaluate these sites for potential inclusion in Dr. Franklin’s study of microbes in extreme environments. Thank you to the entire team of divers and families and support staff – you are all awesome! Last and certainly not at all least…thank you Kyle! You are welcome anytime! Good surface support staff isn’t always easy to find. You demonstrated excellent teamwork and initiative. It was a pleasure working with you and we all are pleased to have you on the team! 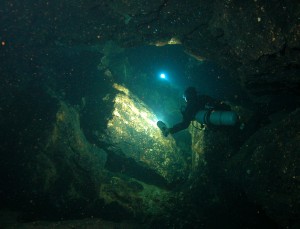 Sandy is dwarfed by the size of this cave!

Join us again this summer for the continuing journey in our springs!! 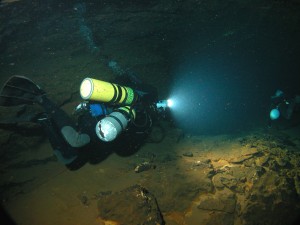 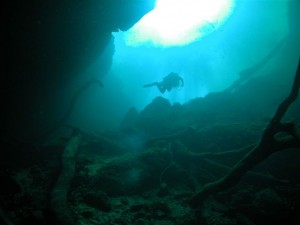 Silhouetted in the cavern at Catfish Hotel 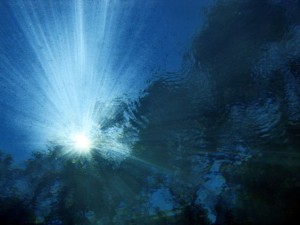 Kind of pretty from below 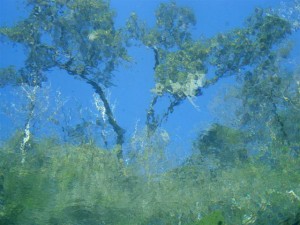 From 15 feet underwater during decompression 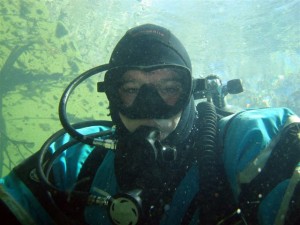 Mike finishing up his decompression obligation 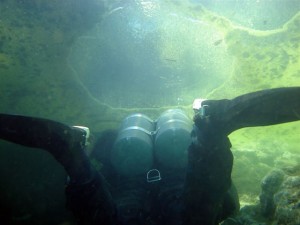 Exhaust bubbles create an opening in the duckweed during ascent 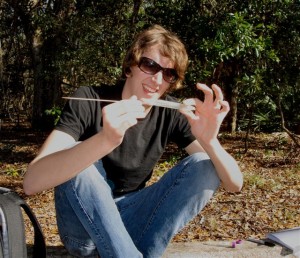