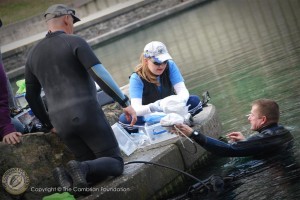 Our day started with one of the coldest winters that Florida has experienced in decades. Bundled up and caravanning to the main entrance of Wekiwa Springs State Park just after 9am, we filed into our unloading zone and set up for what was sure to be a long day of sampling and exploration.

Our first goal of the day was to grab a set of water and bacteria samples from Wekiwa’s main vent. Terrance Tysall, our lead diver for this task, has only entered this spring once before due to its exceptionally high flow, so we knew he would be in for a challenge. However, his years of technical skill and experience allowed him and his dive buddy Karl to effectively retrieve all necessary samples! 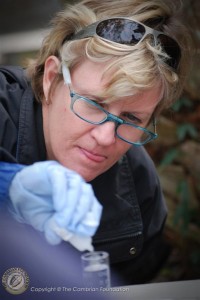 Once the first set of samples had been retrieved, my group’s job could truly begin. Armed with a plethora of water chemistry analysis kits called Chemets, the surface crew began to test for ammonia, sulfide, alkalinity, iron, and nitrate. All of these parameters can be examined in the field with our mobile sampling station that easily sets up and breaks down for transport. However, the bacteria biomass samples were bagged and put on ice to be processed back at Rima ’s lab at Virginia Commonwealth University.

Meanwhile, Karl, Bob G, and Terrence finished changing equipment and preparing for a unique “no-mount” dive at the Park’s other cave system. Unlike most dives in which your tanks are directly mounted to your buoyancy compensator, this cave’s constricted entrance requires that a diver’s tank be pushed in front of him because a sidemount or doubles rig would never fit. The divers began the arduous task of collecting bacteria and water samples from 5 known biomass stations inside the cave. The team was also going to use a new water chemistry analysis device called a sonde to collect real-time data and monitoring parameters such as dissolved oxygen, pH, conductivity, redox potential, depth, salinity, and temperature. Consisting of an 2.5 foot-long cylinder about the diameter of a silver dollar, this device can be transported into the cave attached to a diver and later connected to a laptop to transfer any and all data it has collected throughout the dive or during a long-term deployment.

Lasting for almost exactly 1.5 hours, the team’s no mount dive supplied the surface crew with a couple hours of water chemistry analysis while also providing new materials for investigation. Our lead scientist, Dr. Rima Franklin, was accompanied this time by her colleague, Dr. Aaron Mills, who is currently studying the impact that bacteria have upon the structure of the cave’s limestone. These mostly white mats, which resemble the consistency of mucus or egg albumen, are believed to attach themselves to the cave walls and absorb nutrients directly from the limestone. To make these nutrients available for consumption, they must effectively dissolve the limestone using a variety of chemical reactions. This process is known as chemolithoautotrophy. 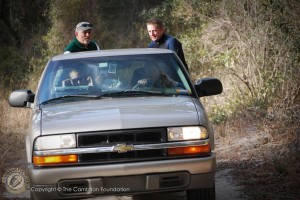 Bob G. and Terrence on the way to Sulfur Spring.

Tired, but excited to pick up a few more samples, the team descended onto Sulfur Spring located in a remote corner of the Park property. Smelling strongly of rotten eggs with the appearance of molten boiling sand, this spring had not been sampled by the Foundation since 2005. Terrence collected the samples of water and bacteria, though this spring does not have a physical entrance that can be accessed via SCUBA. Water samples were pulled at the “mouth” of the boil and bacteria samples were scraped from the surrounding substrate. Throughout this process, I was tasked with transporting all samples collected by Terrence up the steep incline of the Spring’s south face, and let’s just say I barely managed not to fall in! 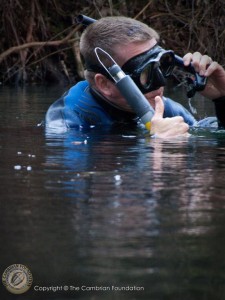 Preparing to deploy the sonde in Sulfur Spring

Instead of analyzing for water chemistry immediately adjacent to the Spring, our team decided it would be easiest to travel directly to our final sampling location and process all of our Chemets at once. Armed with all of our gear, we drove approximately 30 minutes to Palm Spring, located within the same housing development as Sanlando Springs, another field site in our long-term project. With daylight quickly fading, only one set of water samples was pulled from a few feet within the cave and brought to our mobile station to be processed as the sun began to set.

Our new intern Jenny Sherwood was able to fine-tune her analysis skills as it became obvious that ambient light was not going to be sufficient to determine what the nitrate levels were. Thanks to the expert assistance of Aaron, we were able to utilize a high-tech lighting system, car headlights! After a full ten hours of sampling and transport, we were finally able to enjoy a relaxing and delicious dinner of tacos, courtesy of Jef and Sarah! Thanks again!

Thank you to all of our volunteers and sponsors who made this project possible! Your help, expertise, and never-ending comedic relief resulted in a fun and productive day that brings us one step closer to better understanding the ecology of Florida’s springs and caves. 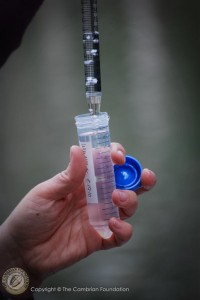 Dr. Rima Franklin fixes a water sample for transport to her lab 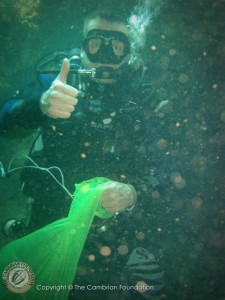 Terrence signals the end of the dive with samples in hand.