Friday June 25th started the first of a four day sampling and educational extravaganza including three new sampling locations in North Florida. For the past few years the Cambrian Foundation has focused its bacteria and water quality analysis efforts on Central Florida springs to establish a historic comparative record, but we have recently decided to expand our sampling locations due to the receipt of a grant from the National Science Foundation to study microbial biodiversity in freshwater submerged caves throughout the state. By including more remote sinks/springs, we will be able to establish a comparison between different submerged ecosystems in Florida while also beginning to create an inventory of Floridian bacterial genetics. 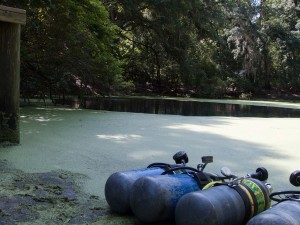 In February of 2009, a small team of divers conducted recon at Rose Sink and Manatee Springs to determine if conditions were favorable for bacterial mat growth and water quality collection. Their dives confirmed that bacterial colonies were indeed present in both locations, spurring the addition of these to our North Florida sampling regimen along with Jug Hole. This list will be expanded as further data is collected regarding feasibility of other sinks/springs inclusion based upon a lack of external inputs and presence of bacteria for collection.

After spending the previous evening at the Cave Diver’s Inn based in Live Oak, the motley crew packed up all of our gear to take the 1.5 hour trek to Manatee Springs where the over-night group joined the other quarter of our team, Terrence Tysall, Kris Shannon, and Carl Saieva. Like all other sampling events, the typical choreography of equipment hauling, dive gear configuration, and sampling kit construction ensued in a well rehearsed pattern. 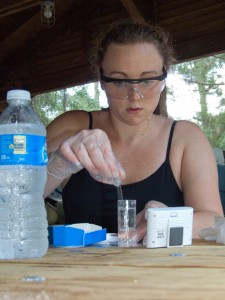 Unlike our Central Florida Springs, many of the sampling locations that we have selected in North Florida do not require entry into the mouth of a high volume spring. Instead, our divers access the aquifer via a solitary little-to-no flow sink, or an offset sink that is an upstream offshoot connection to the spring’s main flow. Today, our team entered via the Catfish Hotel, an offset sink that is almost completely covered with a thick matting of the floating aquatic plant duckweed (Lemna minor). Once on site, we broke the dive team down into two separate crews. Terrence Tysall and Carl Saieva led the first group; their mission to head upstream as far as possible while hunting for bacterial mats along the way. Also unlike our Central Florida project that has specific assigned sampling locations, this project is more focused upon bacteria and its immediate environment. Water quality samples are only to be taken immediately adjacent to where bacteria samples are extracted. This will give us a better idea of the specific conditions on which the bacteria are relying. 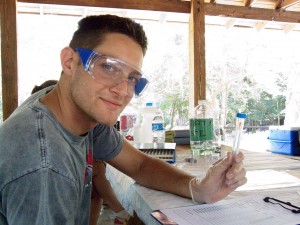 The first dive team descended into Catfish Hotel and returned with three sets of samples for analysis by the surface crew. With the assistance of our new Cambrian volunteers, Alex Houston (our intern for 2010), Amber Taylor (a Virginia Commonwealth University student of Rima Franklin’s), and Sarah Brightman (the Boston Sea Rover’s Scalli Intern) we were able to analyze for Alkalinity, Ammonia, Sulfide, and Iron via portable Chemets kits. Multiple “critters” were also collected from the sink, including cave crayfish and amphipods. These organisms will be shipped to Dr. Jerry Lewis, the owner of Cave, Karst, and Groundwater Biologicals Consulting and Dr. John Holsinger with Old Dominion University for identification, as this process is very detailed and requires significant magnification.

The second dive team consisting of Karl Shreeves, Jef Frank, and Conrad Pfeifer immediately followed the first with instructions to proceed further into the system than the first team was able to reach, given a mission to search for additional bacteria mats. This trip resulted in success as well, providing two more bacteria specimens and their associated water samples for surface processing. As always, Rima Franklin also reserved water samples and bacteria mats from each location for further analysis at VCU. 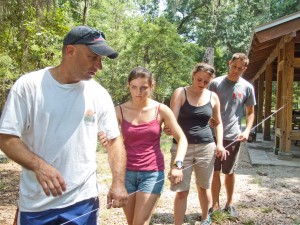 Overall the day was a very productive learning experience that allowed new members of the team to break in their training wheels while also providing the challenge of a brand new sampling location to the veterans. Special thanks to all of our volunteers for all of the time and effort.