Florida Museum of Natural History Was A Hit!

Our team packed up and headed to Gainesville, FL, for an event at the Florida Museum of Natural History.  Being the new intern with Cambrian Foundation, I was ecstatic to have been given this incredible opportunity to help out at the Museum.  Today, we set up five stations in the central gallery.  The five stations were called Gear Up!, Accessing the Dark, Biospeleology, Finding Your Way, and Down Under.  Our goal was to introduce the wonders of underwater cave diving to the world through interactive participation, scientific discoveries, and educational outreach. 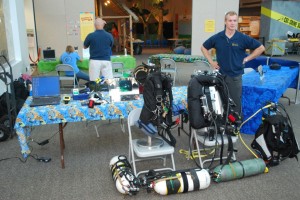 At the “Gear Up!” station, team members Karl Shreeves, Kris Shannon, 2010 Boston Sea Rovers Scalli Intern Sarah Brightman, Jef Frank, and Bob Giguere were able to exhibit different types of diving gear used for cavern and cave diving. Visitors to the Florida Museum of Natural History could look at a set of standard open water gear next to a set of back-mounted doubles – the traditional configuration used in cave diving – and a set of side-mount dive gear. Open water gear is not as equipped as complex as back-mount or side-mount. For cavern and cave diving, a diver must have multiples of everything: air supply, regulators, cutting devices, lights, reels, etc. There are many more safety precautions to take because if one piece of equipment fails, there must be a backup! 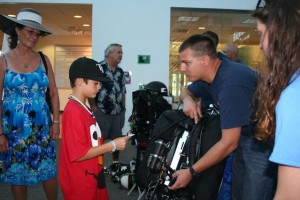 Jef Frank explains how a set of back-mounted double tanks provide redundancy during a cave dive.

Also, visitors were able to see the pros and cons between back-mount and side-mount gear. With back-mount gear, everything is on your back and a diver will not be able to squeeze through tight places in the cave as easy. With side-mount gear, a diver is flatter because his two tanks are worn on either side of the body. Also, it is easier to squeeze through tight passages because a diver is able to take off one tank, push it through the other side, and eventually pull himself through the passage while all of the gear is waiting on the other side! This display was a great chance for visitors to see what it takes to venture into the depths of an underwater Florida cave. 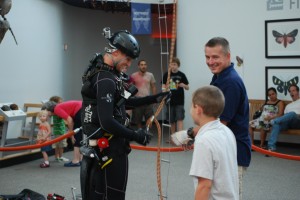 Alex prepares to ascend the cave ladder into the ceiling of the Central Gallery.

Exploring underwater cave systems can be quite exhilarating, but the proper equipment is needed in order to access the dark.  Terrence Tysall, Carl Saieva, Kris Shannon, and Cambrian Foundation Intern Alex Houston prepared a simulation of how a cave diver is able to descend from a dry cave down into the water system, or aquifer, below.  Our team hung a cave ladder and a rapelling rope from the ceiling rafter in the central gallery, which was about 40 feet high.  Being the new intern with the group, I became the guinea pig.   I was in the full attire, which consisted of a wetsuit, side-mount harness, dive fins attached at my side, mask around my neck, extra dive lights, climbing helmet, and a climbing harness.  Volunteers were invited to help stabilize the cave ladder and hold the ropes as I ascended to the top.  After exhausting myself time and time again to reach the top, I would begin to fall off the ladder as our volunteers helped pull the rope tightly to belay as I fell.  I then began rapelling myself back down.  Today I learned that cave diving not only consists of understanding gear for scuba diving, but also consists of understanding various types of recreational equipment…and rock-climbing gear is a perfect example. 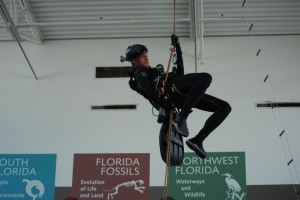 Alex rappels down from the ceiling with the assistance from visitors below.

Every event I do with the Cambrian Foundation is such a great learning experience.  I have been rock climbing in the past, but what I was able to do today was an amazing educational opportunity.  I learned that scuba diving and rock climbing are not two completely different recreations.  Instead, they are just an extension of each other, allowing one who understands both to explore the aesthetic beauty of the underwater realm, far beyond where anyone has ever gone before. 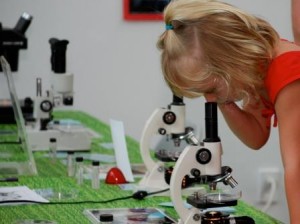 A young visitor gets a close-up look at a cave-adapted isopod at the biospeleology station.

Today Marissa, Dr. Rima Franklin, and I were stationed at the Biospeleology table to help educate visitors on creatures found in submerged caves. The underwater ecosystem is home to small and rare animals called troglobites and stygobites that have adapted to the dark environment. Troglobites are animals ranging from spiders to fish that can live in partially wet or dry caves, whereas stygobites are organisms that live entirely within aquatic cave environments. We educated all ages on these species that can’t be seen by the average person. Microscopes were set up to give the visitors an up close view of the creatures and their phylogenetic expressions. The reactions from everyone were rewarding and beyond excitement. The educational outreach was an extreme success, and everyone greatly appreciated the fact that they were able to take a glimpse at something only a few have been privileged to see! 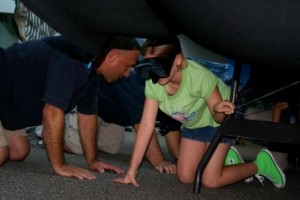 Conrad guides a 'cave diver' through a simulated lights-out/no vis exit from the cave.

At the Finding Your Way station, Conrad Pfeifer, Amy Giannotti, and Bill Ward invited volunteers to participate in line drills used in cave diving training. Inside underwater caves, the source of light does not come from up above the surface, but instead from battery powered flashlights attached to each diver. If all lights quit working, the divers need a strict and consistent system in order to find their way about the cave and back to the surface safely. The volunteers learned a set of hand/touch contact signals that allows divers to communicate underwater without any light. These signals are a crucial part of any dive expedition, and a complete understanding of them will help save divers’ lives. After the volunteers learned these signals, they put on a dive mask that was blacked out, taking away their visual sense. They were then sent through a cave obstacle course, relying on what they had learned in order to get out the other side. This station was a huge hit for all ages!

Down Under
A set of films was aired in the central gallery for all the guests. Cambrian Foundation president, Amy Giannotti, was informing our viewers about each video, giving them a look at the endless possibilities where scuba diving can take them. 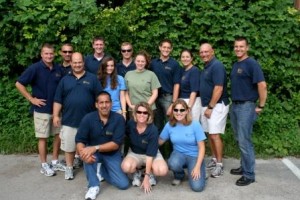 I want to give a special thanks to those who made all this possible.  This was an awesome group to work with, and I’m just so glad that I could be a part of it.  Thank you to the educational staff at the Florida Museum of Natural History – their professionalism, organization, and support were outstanding.  And a BIG thank you to Sartek Industries – one of our primary sponsors!!

We would like to extend our sincere appreciation to Dr. Julian J. Lewis, of Cave, Karst, and Groundwater Biological Consulting of Borden, IN, for the generous donation of cave specimens used in today’s workshop!  Thanks, Jerry!