A Long Walk for Science 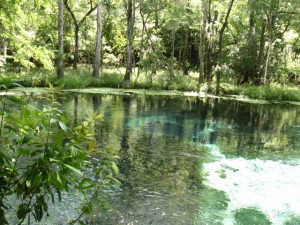 Entrance to Blue Hole at Ichetucknee Springs State Park. The water is clear enough to see to the bottom of the cavern at almost 40 feet in this picture.

We began the day with a smaller team as we had to say goodbye last night to Amber, Karl Shreeves, and Alex…they had obligations at work and school on Monday and we are sorry that they missed such an incredible place!  Their absence and some interesting terrain reminded me today of how gear intensive Cave Diving can be, especially when there’s science involved.  Today’s collection site, the Blue (Jug) Hole at Ichetucknee Springs, carried with it some slightly different logistics, so our day started with a walk to the dive site to evaluate water (and dive) conditions, as well as what it was going to take to get all the diving and science gear down to the site – a half mile walk over wooden plank hammock trails and sandy, tree rooted pathways.  All of our gear had to be transported over this path, so we decided to set up the science station in the parking lot, and only haul dive gear down the long path.  Unfortunately, this still left quite a bit to transport – including my set of PST104 doubles at 130lbs+, all sidemount tanks, and additional safety tanks/O2 deco cylinders, plus all the normal cave diving gear normally required for a mission like this. 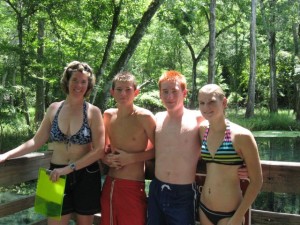 We had the opportunity to chat with a number of folks who stopped by to talk to us, including these students (Tucker Stanfield, Brandon Griffin, and Morgan Stanfield) from Lowndes High School in Valdosta, GA.

Learning from previous experiences over the preceding few days, we planned on splashing the main dive team (Terrence Tysall, Conrad Pfeifer, and Carl Saieva) to collect samples first, and then get the safety diver (me) in the water.  This proved to be a little less hectic on the relatively small platform we had to work on, and reduced the chaos level at the water as we did last-minute equipment checks, recorded starting tank pressures, and finalized plans for the dive.  I was relieved to have no equipment failures today – my light battery failure, blown first-stage O-ring, and locked-up dive computer were still weighing on my mind from the previous few expedition dives, but it was Carl Saieva who wound up battling the equipment demons today with a blown O-ring in a second stage regulator.

The temporary delay gave the team (except for Carl, who was hiking that half mile trail to get a new O-ring from the dive truck!) a chance to get a breath while sitting in the cool 72 degree water.  The wooden platform over the springs proved to be a great place for observing the cave diving operations and sample bag preparation,, as swimmers and snorkelers visiting Ichetucknee from around the country stopped by to find out what we were up to.  I found myself thinking about how great it would have been to have the educational gear down at the headsprings to show pictures of where we were going, what it looked like in the cave, what kinds of things we were looking for, and how this biological mechanism fit into both the water cycle and the formation of the caves – like we had for our last expedition to Wekiwa Springs. 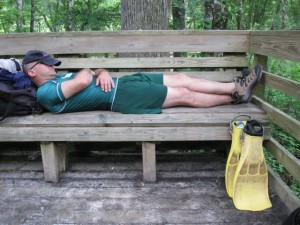 Conrad, on “5 minute readiness level” while waiting for Carl to finish repairing his regulator.

Once Carl had completed his repairs, the main dive team completed their gear-up and the science team delivered the sampling bag to Conrad Pfeifer, who’d been elected into the position of “science bag Sherpa”.  Carl and I were secretly very pleased with this, since we’d worked with this device on previous dives and the mesh laundry-bag seemed to turn into a free-floating yellow monster squid underwater, snagging on everything and taking on a life of its own in the neutral buoyancy of a cave system, while you work (mostly) patiently to pull individual sample containers from it.  There are tricks to this process we’d learned through the course of the dive, but our frustrations with the floating bag of pain seemed to gather very little sympathy from fellow dive team members, so Carl and I just commiserated together and exchanged tips and tricks on our techniques to deal with this issue. 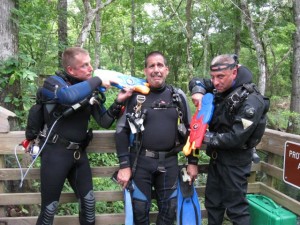 Finally, after seeing the main dive team off, I got myself into the water to take station in the mouth of the cavern zone, watching for any signs of trouble.  I’d dressed for the occasion – while the main dive team mostly dove “wet” (wearing thick wetsuits or “semi-dry” wetsuits) I knew my job as safety diver was to watch the cave entrance for any signs of trouble and assist as necessary or communicate with the surface.  The main dive team would be swimming through the cave, and their natural movements and exertion would keep them warm.  I’d be sitting still, which meant that without adequate protection I’d get cold pretty quick – so my choice of a Harvey’s Drysuit and several layers of undergarments kept me warm despite my complete lack of movement perched on a rock waiting for exiting divers.

After nearly an hour, the cave entrance suddenly lighted up with a dull blue/green glow.  I inflated my wing to achieve neutral buoyancy, started to inch closer to the cave entrance, and was suddenly rewarded for my efforts by being nearly blinded by Carl as he appeared from the sidemount restriction just inside the cave entrance with his new dual Sartek multi-element LED wide-angle video lights.  (These new lights proved to be absolutely awesome for recording the mission in video, as we discovered during our post-dive After Action Report discussions and debriefing!)  Using underwater hand signals – “question, 3, divers, OK” – I got a response – “3, divers, OK”.  Success!  A short safety stop later and the entire team, including me, were out of the water. 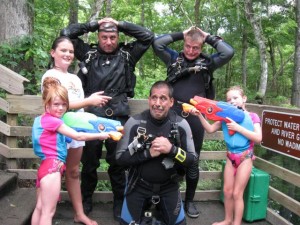 Shortly after the O-ring hold-up, our dive team was overrun by a superior team of swimmers and quickly disarmed.

As we exited the water, samples were handed to the science team, who quickly shoved them into a cooler and transported them the half mile back to the parking lot science station where they’d be analyzed.  The dive team began gearing down, which was made very difficult by our laughing as Conrad, who’d volunteered very little sympathy in our earlier struggles with the yellow floaty sample bag, started “relating” his difficulties with the sample bags.  We all had a good laugh, and spent the next few hours thinking about other potential solutions to the problem.  (Conrad is keen on trying a spring-loaded lobster bag next time – sounds like he’s on sample bag detail again!)

After our sampling dives ended, we all had time to get in the water and reflect on the beauty that is Ichetucknee Springs.  Blue (Jug) Hole provided a stark and beautiful experience, giving us all a taste of how good cavern, cave diving, and snorkeling can really be – gin clear water, beautiful rock ledges, a well formed debris cone covered with broken shells and limestone debris, and one of the most inspiring views of the sun coming through the small ceiling opening into the cavern zone I’ve ever seen.  Hopefully this will inspire our team members and Boston Sea Rovers 2010 Frank Scalli Intern Sarah Brightman and others to continue to pursue their careers in the world of diving and underwater exploration and discovery.

Dr. Rima Franklin (left) and Sarah Brightman, our 2010 Boston Sea Rovers Frank Scalli Annual Summer Intern (right) work to fill sample containers for the divers to take into the cave. Leaving them full of water makes the yellow-green sample bag too positively buoyant and difficult to handle through tight restrictions in the cave.

The long walk back to the cars with dive equipment and the subsequent drive back to the cabin gave us all a chance to think about the expedition as the long weekend came to a close.  Despite the entire team being exhausted, sandy, and a bit hot from the early-morning to late-night schedule in the Florida heat, we’d had some incredible experiences – over the course of the four day expedition, we saw an unusually large number of cave creatures (blind crayfish, amphipods, etc) gathered some new and possibly different bacterial mat and water samples which may provide additional insights into how the bacteria in the caves is functioning, and had an opportunity to dive in some classic Florida cave systems.  The entire team, including both long-time members and “new blood”, bonded well during the expedition and we all left the cabin late after watching the sampling video from earlier in the day, eating some dinner, and saying our farewells, making tentative plans for the next expedition in a couple of months.

A special thank you to Dona, from Cave Divers’ Inn, for the generous and wonderful accommodations provided for our team! And thank you to the staff at both Manatee Springs and Itchetucknee Springs State Parks for welcoming our research team. 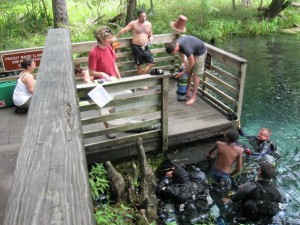