What IS that smell?!? 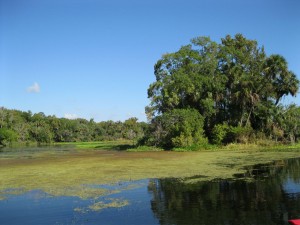 After several late night arrivals last night, this morning began with a packing frenzy…loading up tanks, gear, sampling equipment, people…and – most importantly – DoubleStuf Oreos!! We mustered at 9 am at Katie’s Landing in Wekiva River Basin State Parks. The plan for the day was to sample Island Spring, a small submerged spring in the middle of the Wekiva River. Island Spring is a 3rd magnitude spring discharging an average of 5 million gallons of water per day. At 10 am, Wekiva River Basin Parks Ranger Lee Wood arrived with a boat, and Jef, Terrence, and Amy began our journey upstream to the spring. 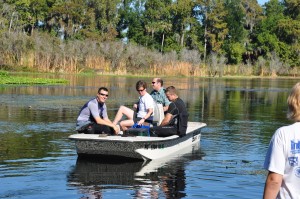 Nestled in beds of long flowing eelgrass, Island Spring was perfectly visible beneath the clear waters and sunny skies today! (Sometimes the combination of tannic waters, cloudy skies, and turbid flow make the Spring difficult to find; but when we arrived on site today, conditions could not have been better!) Colonies of white filamentous bacteria growing on the downstream eelgrass helped guide us right to the site, and we anchored just off of the vent. Jef and Terrence geared up, and splashed in for a 90 minute dive. It was readily apparent that this spring was rich in sulfide (VERY RICH!)…the smell of rotten eggs and the tarnished appearance of brass clips on the divers were a dead giveaway. These findings were later confirmed with the data provided by the sonde. 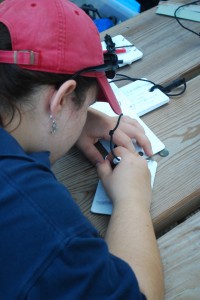 Once all samples and divers were back on board, Captain Lee graciously ferried us back to Katie’s Landing where we were greeted by Marissa, Kris, Betsy, Aaron, and Bob D. – who were anxiously awaiting our return and telling tales of being stalked by a flock of wild turkeys while we were gone…?? Hmmm… The surface team analyzed the water samples immediately for alkalinity, sulfide, ammonia, and iron. Aaron examined the results from the sonde, and we were all intrigued to learn that there is NO measurable oxygen anywhere below the water surface here at Island Spring – from nearly a foot underwater to the bottom of the cave at 60 feet deep. This is likely the reason that our divers did not observe any critters dwelling in the cave. Although we have found numerous stygobites (animals that live permanently in underwater caves) in other submerged caves with LOW levels of oxygen (hypoxic), an anoxic environment (meaning NO oxygen is present) like this is not capable of supporting the crustaceans that often inhabit these systems. What is thriving, though, are the colonies of white filamentous bacteria that are capable of utilizing hydrogen sulfide dissolved in the water as their source of energy. For a freshwater system, it is very rich in sulfur. 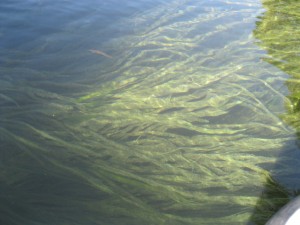 A note from the dark via diver Jef Frank: Today was a unique diving experience. Typical florida caves used for diving are large solution tubes, typically horizontal following old sealevel bedding planes. This was something different entirely – the entire cave was a manhole sized shaft, going vertical from 20 to 60 feet, with relatively high flow. In order to gather samples efficiently, Terrence went first, feet down, and I went in upside down so I could hand sample bottles and provide assistance with the sampling. The cave was made of crumbly grey rock and tons of old shells which easily came loose from the rock. The effect was a very distracting constant stream of shells spinning around you, getting into regulators, under wetsuit seams, covering all of our equipment. In Terrence’s words – “Now I know what it’s like to be inside a snowglobe!” And speaking of sulfur, I (Jef) had a moment of brief concern after the dive when Betsy came over and asked me if I was cleaning out my ears with “ear beer” (rubbing alcohol and vinegar). She explained that the hydrogen sulfide reacts badly with the alcohol. Terrence came running, asking how long I’d had it in my ear and how long it had been since I did that. Halfway to the water to rinse my ears out, I heard the laughing in the distance and came to the realization that I’d been duped. What pranksters! 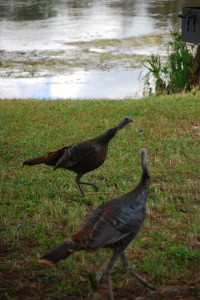 A flock of wild turkeys dropped by...

Marissa ended the day with a post-dive debriefing and we parted ways to prepare for tomorrow’s dive at Apopka Blue Sink. Behind every successful project are a host of sponsors who are essential to making our logistics run smoothly. Thank you to Wekiva River Basin State Parks and Park Ranger Lee Wood for the support vessel and launch access, Seminole Scuba for gas fills, and to Sartek Industries.