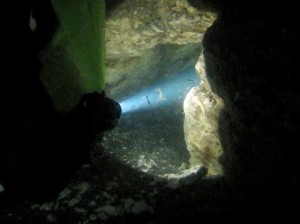 Welcome to Wekiwa!! Off to a great start today as everyone chipped in to get the cylinders rigged and the sampling equipment set up down at the spring. The water is the usual brisk 72 degrees. It was pointed out by Amy that around Christmastime, the water feels balmy compared to the chilly air temperatures. Didn’t make any of us really want to take the plunge though after opening presents. 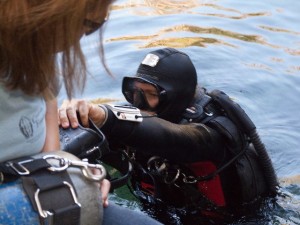 Amy and Alex served as Dive Supervisors today and got the dive team set up and rolling quickly. Cylinders were analyzed, confirmed and logged, then passed down to the divers eagerly awaiting their arrival near the main boil. Wekiwa Springs is a first magnitude spring that pumps out nearly 42 million gallons of water per day!! That’s impressive! This spring draws thousands of visitors to the park each year and is a favorite swimming area even for the locals. 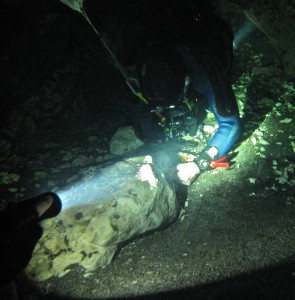 The dives began today with Jef Frank and Terrence Tysall navigating the Wekiwa Springs main vent collecting bacteria and water samples, and preliminary exploration. This is the main spring, but remains relatively unexplored due to extremely high flow. Terrence reported that they extended the area of exploration (still not real far with the flow, though), discovering that the cave comes as shallow as six feet. He also noted what appears to be a side siphon, and hypothesized that it is the feeder to the Wekiwa secondary vent that we have been researching for many years. Clearly, the main vent deserves more attention and exploration. 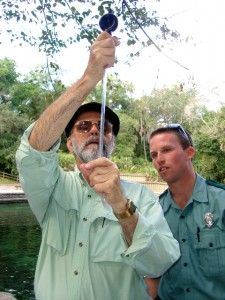 After a dive just shy of an hour, the team surfaced. Once the water samples were topside, the sampling crew went to work processing. Iron, sulfide, ammonia, and alkalinity were the principal tests that had to be conducted immediately in the field as these parameters change rapidly when exposed to air, different temperatures, etc. The remaining water samples were fixed and prepared for shipment back to Dr. Franklin’s lab at Virginia Commonwealth University. Meanwhile the divers geared up for their second dive. 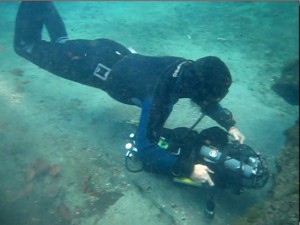 Switching rigs and getting fresh cylinders and joined by Karl Shreeves, they entered the Wekiwa secondary vent. Terrence and Karl dove in no-mount configuration to penetrate to the furthest, while Jef (in sidemount) provided support and sample shuttling via the Shark Fin restriction (a very small restriction shaped like – you guessed it – a shark fin). The dive went well, with some amusing events occurring along the way. While juggling the water sample bottles, Karl lost one and had to chase it into a crack above (they float), where he ultimately recovered it – AND a water sample bottle lost in 2005. Later, at the end of the dive, with plenty of dive time still available, Karl performed his Houdini Water Rope Escape trick, which involves ensnarling your arms, regulator, cave light line and the lanyards of four mesh bags into an intricate knot while in tight passage at the back of a cave just to see how quickly your teammate can disentangle you (per Karl, this was purely for Terrence’s entertainment — that’s his story and he’s sticking with it). The team surfaced after a 109-minute dive, having successfully gathered samples at all five established stations. 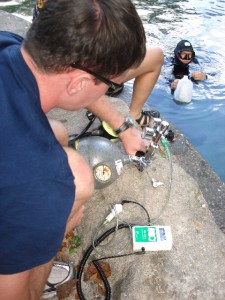 Another successful day at Wekiwa Springs State Park!! Thank you to the Park and District 3 staff for being so accommodating as usual. This could not be done without your continued support! Thank you, too, to Mrs. Johnson (Allie’s first grade teacher) who stopped by the Park for a special visit to learn more about what our research entails! After a post-dive briefing, the team divided to accomplish tasks for the next day. Sarah Frank, Jef’s wife, graciously prepared dinner for everyone, which was a phenomenal ending to the day. Thank you Sarah!! 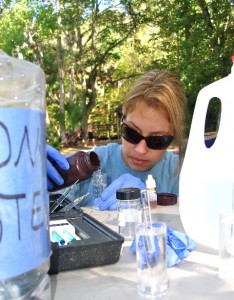 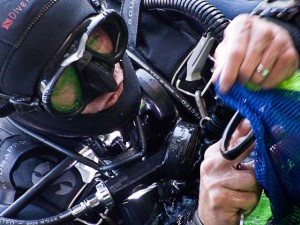 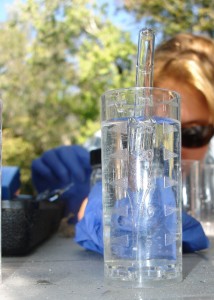 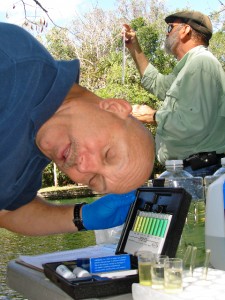 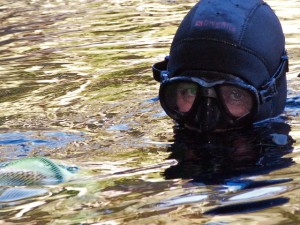 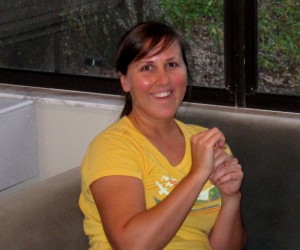