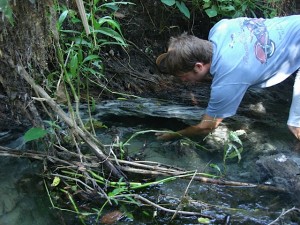 Today we had a minimal team consisting of Rima and Amber from Virginia Commonwealth University, Aaron from the University of Virginia, Renee Power, Steve Dunn – one of the Cambrian Foundation Interns, and myself (Rachel Crane). Our goal for the day was to travel to three non-divable springs in Central Florida and take some grab-samples of bacteria and water. First we went to Nova spring. Nova has that lovely “rotten egg” smell to it due to the sulfur in the water. Once we got there everyone quickly made themselves useful. Amber and I labeled centrifuge tubes, Rima and Aaron got all of the bacteria and sonde equipment squared away, and Steve volunteered to dive down to the mouth of the spring (15-20ft down) to collect water and bacteria samples. Amber collected samples up in the shallower areas, and I used the instrument called a sonde to gather data on the pH, dissolved oxygen content, temperature, and depth of the water. Before helping-out with this entire Cambrian Foundation Florida Springs Biodiversity project, I had never heard of, let alone used a sonde. Surprisingly, taking the measurements is fairly simple. All I had to do was dip it into the water and hold it there for awhile. After Steve finished collecting all of the water and bacteria samples, he dove down one last time, with the sonde, to collect the final data for this site. Once everything was packed back up, everyone jumped back into their cars, and we rolled-out to site number two. 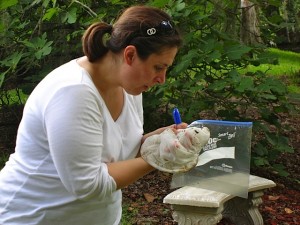 Next on our list was GingerAle spring. A circular cement wall about six feet in diameter and four feet in height has encased this particular spring. Apparently, in the old days, people would use the water emanating from the spring when they bottled gingerale. Ginger plants also surround the site, which enhances the local legend. Unfortunately the cement bowl has trapped a lot of debris over time, and as a result, the spring has been clogged-up and forced to find other routes to the surface. We didn’t have time today, but hopefully in the near future the Cambrian Foundation will be able to get a few people with rakes out there to clean it out. While we were at GingerAle Spring, we also walked a bit further back into to the woods till we hit the Little Wekiva River, and took a bacteria sample and sonde reading. Some of the bacteria that we found at this location were purple! Normally the bacteria we have seen on this project are white and stringy, grey, or a brown color. So, seeing purple bacteria was really exciting.  Once all the samples were collected, it was time to head-off to the last site of the day. 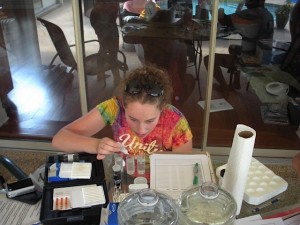 Site number three was Miami Spring, which is misleadingly located in central Florida, closer to Orlando. This spring was by far the prettiest that we had seen today, set back in a neighborhood, and surrounded by trees, with pretty garden bridges crossing over it. Everything was teeming with life. We saw more hawks than we could count, soft-shelled turtles, fish, and everything in and around the spring was green. The water itself was clear and blue. After walking all the way to the boil of the spring, we quickly labeled our sampling tubes, and then Steve once again got into the water to collect everything. The boil for this spring was really shallow, and he simply had to lay on his stomach and go down maybe three feet to get the samples. I say simple, but this was actually pretty difficult because the flow was very strong, so he sometimes had trouble getting down. But, all in all, everything ran smoothly, and we left with all that we came to get. 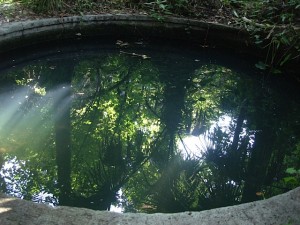 Now that all the samples had been collected from each site, it was time to run all of the water quality tests. We used Chemets, which are these little kits from a company called Chemetrics that have all the supplies to test for the presence of alkalinity, ammonia, sulfur, and iron in the water. They are also very easy to use in the field. Everybody was assigned to a kit or other analysis job, and we were able to record all of our data in no time at all. Once everything was recorded and put away, we had a little bit of time to socialize, and then everyone had to go their separate ways. 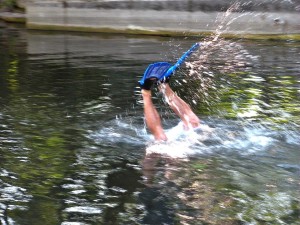 Steve Dunn begins his descent for a sample at Nova Spring

As a whole, all of the time that I have spent working on the Florida Springs project over the past few days with the Cambrian Foundation has given rise to one of the most unique, enjoyable experiences of my life. I’ve learned more about caves, cave divers, bacteria, science, and the positive impact that one organization can make than I ever thought I would. The people and atmosphere around everything has been extremely fun and welcoming, and everyone is really good about mixing fun, work, and education together. I really hope I have the opportunity to come back again in the future.

Questions/comments to the Trilobite?? 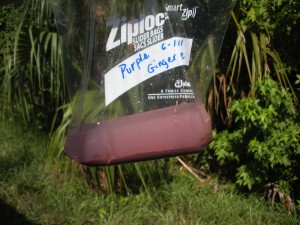 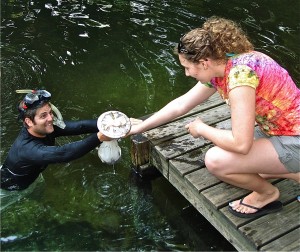 Bacterial specimens return to the surface via Snorkeling Steve!