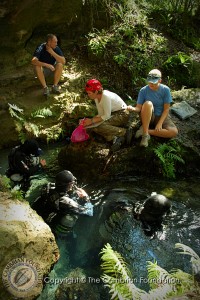 Today promised to be an interesting day.  I’d been inside Rock Springs a couple of times before, and my memory of the place was that is was small, shallow, high flow, and very fragile.  Our mission, to collect both water and bacterial samples in 5 stations throughout the system, would be an interesting challenge.  The flow is intense, constant, and there’s nowhere to hide.  On previous dives I felt like a news reporter in a hurricane trying to explain how strong the winds were, hanging onto small rocks on the bottom, and flapping in the water flow.

One thing I remember from my previous dives here was that with a max depth of 16 feet I never felt like I was quite able to achieve the buoyancy I wanted.  I’d be diving the same configuration as before – 5mm unlined wetsuit and Genesis 100 tanks.  Negative to start, slightly negative at 1000psi.  As I started thinking through the dive, I decided to make a few gear adjustments. 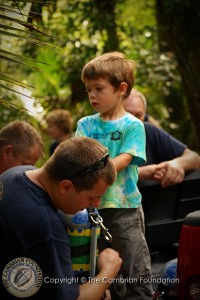 I was grateful to have help assembling my gear - Theo (Rima's son) helped to hold my tank while I attached cam bands, weights, and inner tube straps.

My first choice was regulators.  I wanted a good set of high performance regulators for the day’s dive.  From my last experience here, the initial few hundred feet were an exercise in persistence.  SWIM SWIM SWIM GRAB ROCK (whew) breathe breathe breathe relax ok lets do it again SWIM SWIM SWIM….  I picked out a couple of high performance MK25/S600 regulators, attached a 7′ hose, and made sure they were in perfect working order.  I can turn these down to prevent free-flow, take the second stages apart under water to clear debris if necessary, and they definitely deliver all the air I needed for the effort.

Secondly, I definitely wanted to be a little more negative.  The cave is basically sharp rock on the floor and ceiling with pockets of sand in places.  If you’re lucky, you can swim along and find a rock to grab on to for a rest, or some deep sand you can grab onto and pull yourself along with.  Being slightly more negative meant I would be able to stick to the bottom better, which was going to be useful not only for propulsion (forget pull and glide, this is pull pull pull) but also for carrying the sample bag into the cave since it was likely to be positively buoyant.  I strapped an extra 4lbs of lift onto each tank with a cam band.  The new Nomad XT I was diving has nearly 50lbs of lift, so the extra 8lbs of lead wasn’t going to matter a whole lot. 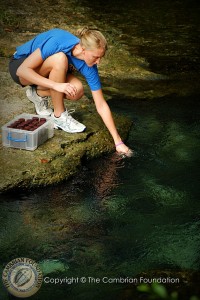 Jenny preps water bottles for samples from the cave. Jenny is a former intern and was the 2010 recipient of the Legare R. Hole, III, Memorial Scholarship.

The sample bag is an entirely different topic.  Over the years, the sampling technique utilized by the team has evolved quite a bit, both in collection devices, carrying containers, transport mechanisms, and methods of returning the sample back to the surface support team.  It feels highly efficient compared to some of the stories I hear about methods from 5 years ago, but in the end, it’s a challenging task in a challenging environment in essentially zero gravity.  We’d be going into Rock Springs with a small version of the sample collection system (4 stations, a set of small bottles and tubes and a plankton bag per station) eliminating a whole set of plankton sample bags per station.  However, as cave divers we’re trained to be streamlined.  The sample bag is kind of like hanging a cheerleader pompom off the top of your sleek new car.  Completely anti-streamlined.  Going into Rock Springs, my concern was dragging the sample bag over the ceiling as we swam, snagging it on the rocks below, or dragging it behind me like a parachute.  Being more negative in the water allowed me to better compensate for the highly positive sample bag.  The technique for carrying the sample bag into the cave I’d settled on for the day would best be described as how a running back carries a football down the field, tucked into my elbow, hiding against my body, leaving one arm free to help maneuver in the cave.  This prevented the bag from dragging on anything as we progressed through the mission. 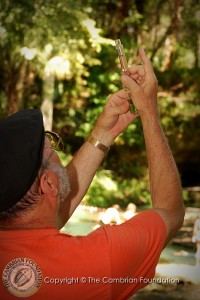 Aaron Mills, from the University of Virginia, fixes a water sample for analysis on-site

Final gear-up and mission briefing went smoothly.  On the third day of an expedition we’ve typically got the sampling down to a science.  The team entered the water and started doing final dive checks: lights, leaks, regulators/thirds.  Terrence discovered a somewhat major regulator issue which manifested itself by exhibiting a massive free-flow for several seconds until the tank could be shut down.  Fellow cave diver and CF member Bob Giguere was standing nearby to assist with regulator swap-outs, but, with the commotion of the visitors to the park, he did not hear his name being called.  The entire dive team and a few topside support folks started chanting “Bob, Bob, Bob, Bob!” in like the “mine, mine, mine” birds from Finding Nemo until Bob was able to get down the to water and start making the repair.  This wound up being funny enough that when Bob returned with the repaired tank, he got the same “Bob, Bob, Bob, Bob” treatment.  Thanks for being a good sport Bob, Bob, Bob, Bob!

The dive began with Karl leading and running the sampling at stations 1 through 3, me carrying the sample bags, and Alex providing light with his 18 watt Sartek HID setup (enough light that I really didn’t need my dinky 700 lumen LED primary on the entire dive).  This was a huge help since I was busy with the sample bag and helping Karl stay steady in the flow.  Aiming my own light to be helpful for either Karl or myself was beyond the number of hands I had available for the task.  Alex was a rockstar with his lighting and support on the dive. 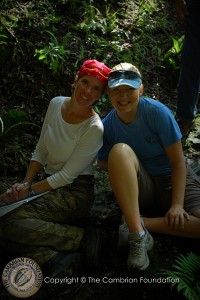 Amy and Marissa take a break from the TICKS to say, "Cheese!"

Being negative helped quite a bit during sampling.  I was able to deflate my BC completely and anchor well to the bottom.  This allowed me to bend in half slightly, creating a nook in my chest area where I could work with the sample bags.  In the flow, the bags tended to stream out nearly two feet behind me, so I could reach in with my arm and easily get things out.  During the scraping process to collect bacterial samples, I was able to provide some support for Karl by pushing down on his fins and tanks to keep him steady, which would have been an otherwise impossible feat if I was a bit lighter.

We finished up the sampling of station 3, about 650 feet into the cave, and handed off the Sonde sampling device to Renee.  This was a fun experiment in the flow since we hadn’t really considered that it might not easily fit her new sidemount rig.  It took several minutes of finagling to get it attached, and then Dive Team 1 (Karl, Jef, Alex) started the exit from the cave.  Dive Team 2 (Terrence and Renee) continued into the cave to work with the remaining stations.

We exited the cave with no issues.  I stopped once to clear my mask and get a few things adjusted before going through a difficult part of the cave.  The visibility was poor because we were travelling with the water we’d stirred up, so in some places we were on or near the line.  Our 25 minutes of hard efforts to swim to the back of the cave was quickly undone by the massive flow of water in a mere 10 minutes on the way out. The flow provided a nice ride through some very pretty cave we couldn’t really see due to the stirred up cloud of silt and sand.

Once all dive teams returned to the surface, a post-mission briefing was held, and no major issues were reported. 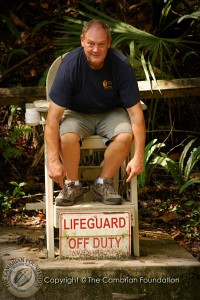 Since Wayne wasn't "on duty" this weekend, he graciously donated his time to help the Cambrian Foundation! Thanks Wayne!

One final note – the War of the Cookies has begun!  After being shorted Oreos from the previous two days of diving (the surface support team apparently ate all of the Oreos before the dive team surfaced) the surface team thought it’d be funny to fill an empty tray of Oreos with dirt, label it “Diver Oreos” and try to get us to eat them.  Cookie revenge is best served cold.  To be continued….

Questions/comments to the Trilobite?? 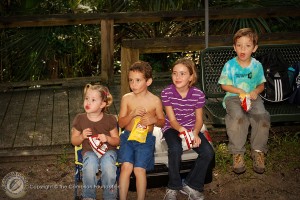 The next generation - ALWAYS eating! 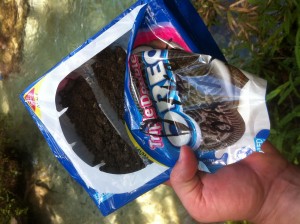