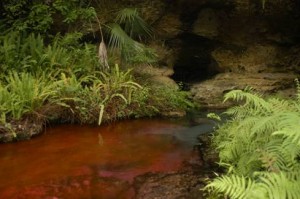 Apopka Blue Sink lies in the forest on the outskirts of the City of Apopka, about 12 miles northwest of Orlando. As is the unfortunate case for many sinkholes, this karst window has become the respository for litter, trash, and other waste. The Cambrian Foundation was first contacted by the City of Apopka in 2001 to assist with debris removal from the bottom of the sink. Garbage removed during this expedition included a burned sofa, Christmas trees, a car engine block, bottles, fencing, etc. Once the material was removed to the surface, recyclables were sorted and hauled away to the appropriate disposal facility. In addition to being a 70’ deep window into the world beneath our feet, Apopka Blue Sink is home to a species of aquatic cave crayfish known only to this system, the Orlando spider cave crayfish (Troglocambarus sp.). Given the rare species that rely on these habitats for survival, maintaining these karst environments free of litter and external debris is critical to their success. 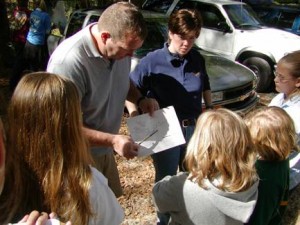 The Cambrian Foundation returned again in 2003, directed by Cambrian Foundation cave diver Anna Olecka, and were again joined by members of the Girl Scouts of the United States of America for a unique educational experience in addition to the cleanup. Using our Human Remotely Operated Vehicle, or Human ROV©, the surface support team was able to interact via live, two-way audio and video communications with our divers in the cave. This enabled the Girl Scouts to see firsthand the extent of pollution, the ecological pressures this ecosystem faces, the unique geology underlying the forest terrain, and the delicate creatures that call this place home. Along with the cleanup and educational outreach programming, we also conducted a dye trace to determine whether or not Apopka Blue was connected to Rock Springs, a local recreation area in nearby Kelly Park. Using eosine dye, we were able to document the hydrologic connection between this remote forest sinkhole and a swimming area that is popular for many central Floridians and tourists. This further justifies protecting the entire springshed around Rock Springs and Apopka Blue, and we now know that the watershed is much larger than previously thought. Cambrian Foundation diver and filmmaker Bob Giguere produced a documentary about this expedition for a PBS series called New Florida. This project was sponsored by City of Apopka, DiveRite, Equinox Documentaries, Karst Environmental Services, Ozark Underground Laboratory, Project AWARE Foundation, and the Girl Scouts of the United States of America/Citrus Council. 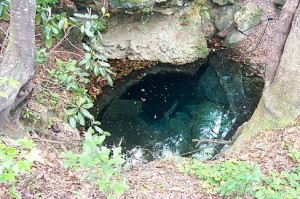 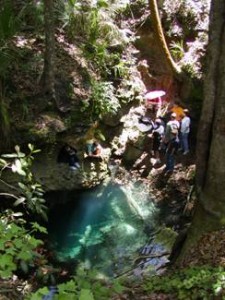 View down into Apopka Blue Sink

Click here to see daily updates during the project work. Notice at the upper right of the updates preview page you can click on the year of interest in order to limit the amount of updates previewed.