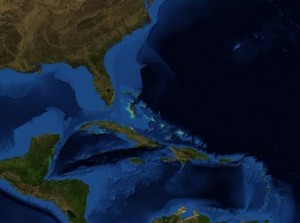 Bermuda lies about 500 miles east of Cape Hatteras, North Carolina, and is home to the northernmost coral reef in the world. A little over 21 square miles Bermuda is also one of the most densely populated areas with nearly 68,000 people inhabiting, and 400,000 thousand people visiting the island nation annually. Facing increased pressures from land use practices and pollution, these ecosystems—particularly the caves, seagrass beds, and coral reef communities—are becoming more susceptible to the problems associated with urbanization and population growth. Specifically, the high population density combined with cesspit/borehole methods of disposing wastewater, sewage, detergents, liquid waste, medicines, petroleum products, etc., have resulted in groundwater contamination and loss of habitat spanning the terrain from inland caves to offshore reefs. Lying atop a limestone-capped volcanic (basalt) seamount, the ancient atoll that is now Bermuda is home to over 150 caves that penetrate this karst terrain, and these cave passages serve as conduits of flow for groundwater and runoff that travel between land and sea with the tides. Not only spectacular visually, as they are adorned with an abundant array of stalactites and stalagmites, these caves support over 25% of Bermuda’s rare endemic species. In many cases, one species is confined to one cave system alone. 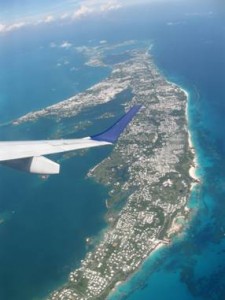 The current level of threat equates to a 50% chance of extinction within the next 10 years, and development trends in Bermuda suggest that these pressures will only increase. Two of Bermuda’s caves (Church Cave and Bitumen Cave) have been named in the Top 10 of the Most Endangered Karst Ecosystems on Earth by the Karst Waters Institute (IUCN, 1996), and three of these caves are listed amongst the Top 18 global cave biodiversity hotspots according to Karst Waters Institute. Many species of subaquatic cave invertebrates are endemic to only a few locales on the island. However, due to their limited distribution and the fragile nature of the marine cave habitat, these animals are particularly susceptible to the threats from pollution, construction, quarrying activities, illegal dumping, runoff, littering, and vandalism.