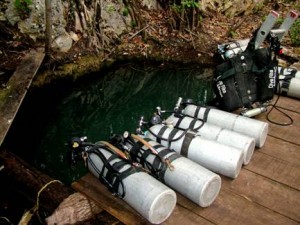 Sidemount cylinders are ready for exploration and survey at Cenote Muchachos.

Cenote comes from the Mayan word tz’onot, meaning ‘sacred well’, and is used to describe sinkholes (and blue holes) throughout the Yucatan Peninsula and Caribbean. Cenotes, or sinkholes, form in areas where karst has either collapsed or been dissolved. The result is an opening left in the limestone that is often filled with groundwater. Usually this opening is circular in shape and surrounded by steep rocky cliffs. Typically, cenote water is very clear since it originates from rainwater falling and penetrating through the karst. Because the karst is so porous, there is little time for the water to accumulate organic particles and debris during its transport to the aquifer or cave system. 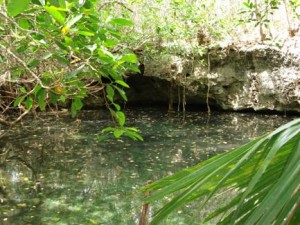 Groundwater inside some cenotes and cave systems is stratified, or layered, due to differences in water density, which are the result of variations in salinity. Salt water is more dense (contains more dissolved particles) and lies below the freshwater lens. This border where the fresh water and salt water meets is referred to as the halocline. For divers, this drastic change in salt concentration yields a section of water with blurry, or reduced visibility. Some cenotes and caves are entirely filled with salt water (Bermuda), and these are termed anchialine, or anchiahaline, systems.

In the coastal portion of the Yucatan peninsula, cenotes dominate the landscape and are connected to an intricate system of underground rivers and caves. In ancient times, these cenotes were not only a source of drinking water, but were also important spiritual sites for the Mayan people and their culture. 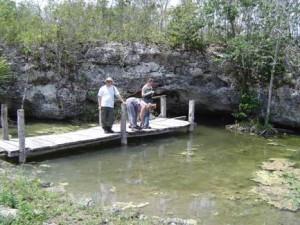 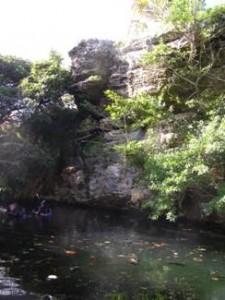