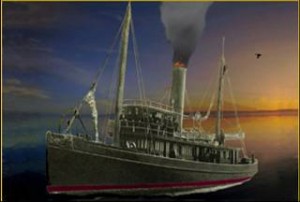 The SS Commodore was built, at least in part, at the Neafe and Leavy Shipyard in Philadelphia, PA, in 1882. Her frame was fashioned out of oak, with yellow pine deck plankings, and iron and bronze fasteners. She was powered by a single coal-fired steam engine, with a 26” cylinder and an 80” stroke. She was 123’ long, and her maximum speed was 12 knots.

While her homeport was Greenport, Long Island, NY, she was purchased in the summer of 1895 by a Cuban Junta to be used as a filibuster to smuggle guns to Cuba during the Spanish American War.

Her crew was comprised of 29 sailors, 18 of whom were from Cuba and 11 Americans. She carried 15 tons of munitions, including 40 bundles of Remington rollingblock rifles, a number of Mauser & Winchester rifles, rifle and dynamite cartridges, cannon rounds, and a variety of drugs and medical supplies. This cargo was valued at $4.465.00 in 1896.

Her fateful day came on January 2, 1897, at 7 am, just 12 miles off of what is now Daytona Beach, FL. The casualties included 8 Americans and 4 Cubans who were never accounted for.
Several theories surround her sinking and include treachery, overloaded, weather conditions, ship condition, incompetent crew, grounding, etc. Although we may never know what caused her demise, her remains rest in 78 feet of seawater.

Don Serbousek is credited with the discovery of the wreckage, and early preservation of the site was overseen by Mr. Serbousek and the Volusia County REEF Team.