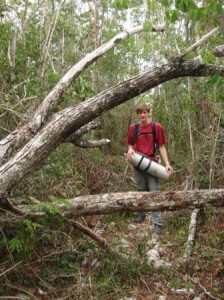 As Kris grew up on Florida’s east coast in Jupiter, the ocean and the life it contained became paramount in his world. After moving away from Florida for several years, he came back and quickly sought marine opportunities by taking a marine biology class at Orlando Science Center (OSC). Before he knew it he was on staff as a Nature Works supervisor, responsible for the care and feeding of 550 animals, as well the maintenance of the environments of the same (i.e. 50 gallon to approximately 7, 000 gallon tanks and filtration systems; public and holding tanks and cages). Kris also did public education programs for school groups visiting OSC and developed the science center’s prototype for intergenerational leadership mentorship programming for youth 12-18 years of age. One of the OSC community partners that came in for the CineDome movie Amazing Caves was the Cambrian Foundation. This is where Kris met Terrence Tysall–ensconced in full dive gear and marching (flopping) around the museum at the time!!! Terrence slowly persuaded Kris to work with the Foundation, offering a chance to take part in active research projects that coincided with his biology coursework and to assist with dive operations. This was an offer he could not refuse!

Kris began as a Cambrian volunteer and later became an intern. His involvement over the last several years has allowed him to participate in a host of Cambrian events and projects: helping with the Annual LegaSea Gala and the annual gift wrapping fundraiser, educating the community to environmental needs in the schools; hiking through the jungle with a tank on his shoulder in the Sistema Camilo/Akumal project; working at NASA with environmental scientists; actively participating in the evolution of the longitudinal biannual Central Florida Springs Project and the Bermuda Cave Conservation Distance Learning Program Interactive Cave Broadcast; and was honored by receiving the Legare R. Hole, III, Memorial Scholarship. Currently, Kris is at Discovery Cove Orlando, where he is a member of the Water Safety Team; his position allows him to be immersed in marine life on a daily basis. In each Cambrian experience, Kris has attempted to commit every bit of knowledge that was offered to memory and to scaffold on it as he advocates for the preservation of aquatic realms in Florida and beyond.