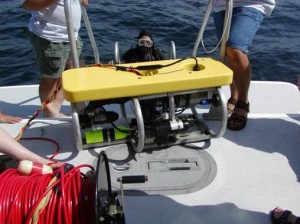 Fuqua students launch the ROV from the vessel on the wreck of the SS Commodore. ROV courtesy of Baxley Ocean Visions, Inc.

ROV stands for Remotely Operated Vehicle. Functionally, an ROV acts as a robot that is capable of performing tasks underwater while tethered to a support vessel. The cables that attach the ROV to the ship contain many different kinds of wires necessary for the ROV pilot on board the ship to be able to effectively communicate with the ROV. The pilot steers and controls the ROV using a joystick and a video monitor. This is accomplished by installing a camera on the ROV that allows the pilot to ‘see’ where he/she is maneuvering the ROV. 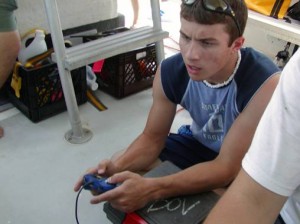 Josh Owen pilots the ROV and surveys the wrecksite below.

There are many different kinds of ROVs, and they can do everything from provide video footage, to collect samples and specimens for research, to provide support for manned submersible vehicles. They range in size from a shoebox to a large vehicle, and are used in a wide variety of underwater applications.

The ROV used on the SS Commodore was generously provided by Bill Baxley, of Baxley Ocean Visions, Inc.