While the Spanish-American War only lasted for about 8 months in 1898, several important historical events led to the eventual revolution that declared Cuba’s independence from Spain. Since the 1850’s, Americans had expressed an interest in the Spanish colony of Cuba, and this thirst for Cuban independence fueled an uprising in 1895. The revolution in Havana was sponsored, in part, by several organizations from the United States, and the conflict was often the lead news story in several papers. Journalists whose attempts to incite American interest in Cuban independence were successful.

In the spring of 1898, President McKinley sent the USS Maine into Havana harbor to establish an American presence of authority, though he was reluctant to respond to the public’s ever-growing demand for declaration of war. The USS Maine mysteriously exploded February 15, 1898, and this event triggered the conflict that lasted throughout the summer of 1898 over the United States’ call for Cuban independence from Spain.
(Ship photo from http://www.history.navy.mil/)

Although the fighting only lasted for four months, the conflict wasn’t resolved until the signing of the Treaty of Paris on December 18, 1898, which gave the United States control over these former Spanish territories and colonies.

The SS Commodore was a filibuster ship, used to smuggle guns to the Cuban rebels who were opposed to Spanish occupation during this revolution. And Stephen Crane, a Hearst correspondent, was on board as an undercover reporter to cover the events that were to unfold. 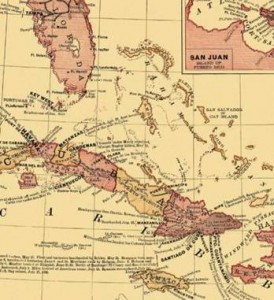