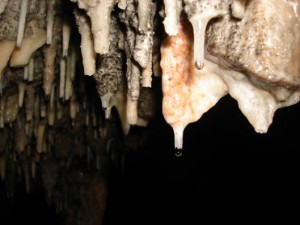 Stalactites and soda straws forming in a cave near Aktun Chen, Mexico

Speleogenesis is the process by which caves are formed and changed over time. Rates of cave formation, or speleogenesis, vary significantly and are influenced by a suite of geological, hydrological, meteorological, chemical, and biological processes. These can include precipitation, groundwater movement, salinity, bedrock composition, water chemistry, erosion, digging, pressure, tectonic plate activity, presence of bacteria, etc. Multiple sea level changes in earth’s geologic history have meant that some caves have transitioned between ‘dry’ and ‘aquatic’ (both fresh and saltwater).

There are a variety of ways by which caves are created, shaped, and changed over time. Primarily, solution caves are formed when slightly acidic rainwater dissolves limestone (or some other type of soluble bedrock). Rainwater combines with carbon dioxide as it falls as precipitation, and this makes the water mildly acidic. The infiltrating rainwater then absorbs more carbon dioxide from decaying plant material as it moves through the soil. This changes the groundwater into a weak form of carbonic acid, which is capable of dissolving limestone, dolomite, gypsum, etc. 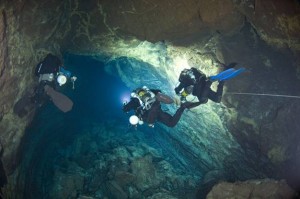 Lava tubes occur when hot, moving lava carves hollow tube-like channels in bedrock. This process begins when a volcanic eruption occurs, or a volcano is geologically active. The lava tubes develop in the bedrock beneath the lava flow. Speleothems and mineral deposits are commonly found in lava tubes, though their structure is different than those found in solution caves.

In some caves, microbes produce sulfuric acid, which dissolves limestone and essentially ‘creates’ more cave. This is probably the most unique type of speleogenesis. The production of sulfuric acid by microbes dissolves rock into its elemental components, and these elements provide an energy source for chemolithoautotrophic bacteria.