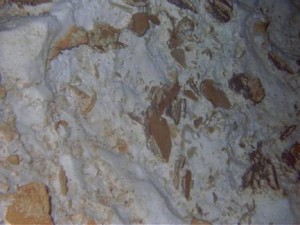 Apopka Blue’s geology (as well as other springs in central Florida) is characterized by a deeper layer of Ocala limestone covered by a surficial layer known as the Hawthorne Formation. Ocala limestone dates from the Eocene epoch (55 to 33 million years ago), and it is characterized by fossils of bryozoans, mollusks, and sea urchins. These are the oldest fossils found in Florida and were laid down when Florida was covered by the ocean. This type of limestone is exceptionally porous and is the dominant layer found throughout the Floridan aquifer. Karst features found here generally show a lot of topographic relief, as is the case with the steeply sloped hillsides surrounding Apopka Blue. 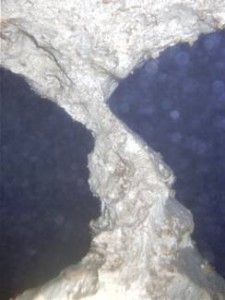 In many cases, another type of limestone (the Hawthorne Formation) covers the Ocala limestone and acts as a confining layer, limiting the movement of water between the two layers of rock. The younger Hawthorne limestone is from the Miocene epoch (23 to 5 million years ago) and ranges from 25-30 meters thick. Fossilized shark’s teeth dominate this layer.