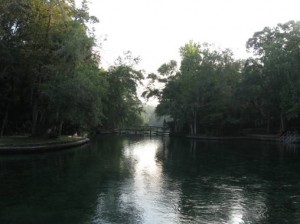 Wekiwa Springs lies just northwest of Orlando, Florida, and the spring and its cave serve as the headwater of the Wekiva River. The Wekiva River system is a tributary of the St. Johns River and is recognized federally as a National Wild and Scenic River.

Wekiwa Springs release a total of 43.3 millions of gallons of water per day, and as such, is classified as a 2nd magnitude spring. This equates to an average discharge of 500 gallons per second. 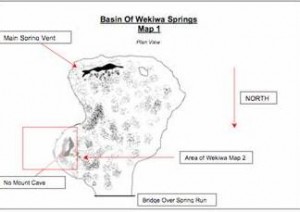 Map of the basin of Wekiwa Springs

The entrance to the cave is associated with the smaller of two vents in the spring basin, and flow through this opening is ~30% of the total discharge from the spring. The cave opening is a horizontal bedding plane with coarse sand along the floor that extends for several meters, opening into a small photic zone populated with filamentous white bacteria. This tunnel opens into a completely dark room, where the ceiling and walls are heavily covered with three morphologically distinct types of microbial mats. Similar mats have been observed in all areas of the cave that have thus far been explored, and are largely comprised of sulfur-oxidizing bacteria and diverse communities of invertebrates. Samples from nearby wells confirm sulfide concentrations in the regional groundwater of ~ 1.5 mg/L, though concentrations for water collected in the cave are below detection. Dissolved oxygen concentration in the water is exceptionally low (< 0.5 mg/L). 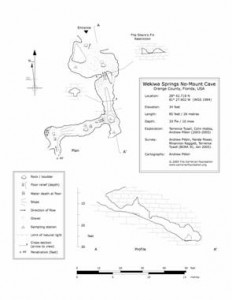 Since 2004, routine monitoring of water chemistry and microbial biomass within the submerged cave system has confirmed that the biomass produced by the chemoautotrophic microbial communities living here is high, comparable to what would be found in the alpine desert or scrubland tundra. This production rate is remarkable for a system with no photosynthetic activity and suggests that the bacterial chemosynthesis in submerged caves can also provide a plentiful source of energy and nutrition to support the higher life forms endemic there, similar to that which has been demonstrated in subaerial, or vadose/dry, caves.