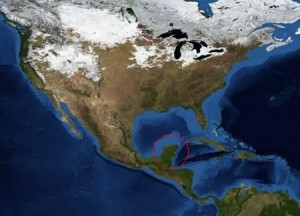 Yucatan is derived from the Aztec word ‘Yokatlan’, meaning ‘place of richness’. The Yucatan peninsula is located along Mexico’s southeastern coast and juts out into the Caribbean Sea and Gulf of Mexico. It is comprised of three coastal states in Mexico – Yucatan, Campeche, and Quintana Roo – as well as the countries of Belize and Guatemala. Geographically, the area is very flat and has little change in surface topography. Geologically, though, this area has been active in terms of sea level changes, cave formation, and their combined influence on native culture and wildlife. 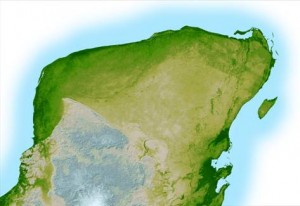 Yucatan peninsula; Sistema Camilo is located along the eastern coast

At the end of the Cretaceous period around 65 million years ago, this area was the site of an asteroid impact that some scientists believe is associated with one of earth’s mass extinctions – the loss of the dinosaurs. For thousands of years, the Mayan people called this land home, and they still make up the largest concentration of indigenous people in the Yucatan peninsula today. The Spanish began exploring Yucatan in the 1500s, and after years of fighting, eventually claimed this region under the Spanish flag. In 1821, Mexico declared its independence from Spain, and this period was followed by several turbulent attempts at secession by the Mayan people who were reluctant to unite with Mexico. Although they repeatedly sought independence, the loss of commercial ties with Mexico rendered this region the victim of economic hardship. In the 1950s and 1960s, modern infrastructure joined Yucatan to the rest of Mexico, and today, tourism has become the basis for the economy in Yucatan. Booms in real estate sales, development, and construction, combined with cruise ships capitalizing on this tourist destination mean that this area is now referred to as the “Mayan Riviera.”