Setup for the broadcast 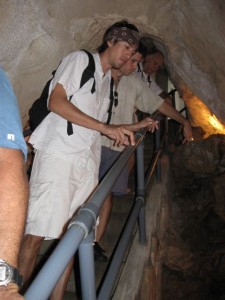 John (Nelson), Alex, and Phil look down into Fantasy Cave

Now that we are all here and on site, it would probably be helpful to mention all of our team members on this expedition as we are very fortunate to have partnered with Interactive Expeditions (www.intxinc.com) for this really one-of-a-kind experience, and we have some new faces to introduce. Their team is made up of John Rife (surface camera), John Nelson (production coordinator), Jon Jones (archival camera footage) (yes! it’s confusing around here), Alex Katsaros (mixing board/audio/video feeds), and Phil Peters (professor, University of Central Florida). And, we would like to also thank Adam Lenz, the technical guru back home who is integrating all of these broadcasts for us. Interactive Expeditions is based in Orlando, FL, and they are providing the “link” to make this interactive broadcast possible. Being able to broadcast our Human ROV to places off-site has been a dream of ours for several years, and little did we know that those who would make it possible for us to do such a thing were located right in our backyard! Back in 2006, we did a broadcast using microwave technology to a local high school here in Bermuda, but this partnership with IntX takes our remote, interactive, and mobile broadcasting ability to a whole new level! 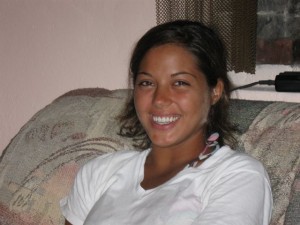 For the next two weeks, we will be broadcasting from underwater in Fantasy Cave here in Bermuda to the Orlando Science Center, the Bermuda Underwater Exploration Institute, Moody Gardens/Galveston Aquarium, Texas A&M Sea Campus Kids Program, and to many home computers worldwide! Participants will be able to chat, and interact via live audio and video feed – truly, a unique educational experience!

Today was our first day of setting all of our gear up and testing it. The satellite dish was the first thing to be unpacked, and upon assembly, it began autolocating its position and searching for its satellite in space. Once that was established and bandwidth was available, we began experimenting with all kinds of equipment feeds that are coming in and going out of Fantasy Cave – and no, they don’t have wireless internet 122′ underground. 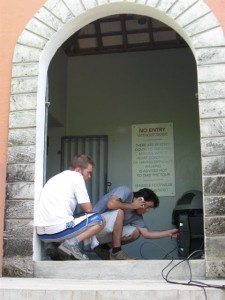 While the IntX crew was working on the technology, Carl Saieva of Sartek (www.sarind.com) was helping Terrence and Amy with audio and video work on the underwater system. All of these (surface cameras, underwater cameras, microphones, headsets, teacher’s tablet, etc.) have to be integrated in such a way that Terrence (our diver and Human ROV) can hear student’s asking questions and interact with the teacher on the surface (Amy) – who is fielding questions/dialogue from cave visitors, online participants, and students off-site. After a VERY long day in the cave, we called it quits at 5:00 and began heading out to prepare for the next day. IntX went back to Clear View to troubleshoot a few issues, Jenny/Terrence/and Gil headed off to another entrance to Walsingham System to install a sonde, and Carl/Amy went to Triangle Diving in Grotto Bay to rig Carl’s gear for the broadcast day. Carl and I enjoyed a leisurely evening snorkeling and visiting with the staff at Triangle Diving (www.trianglediving.com). At 11:30, we reunited to fill tanks and head for home to catch some zzzzzzzz……. 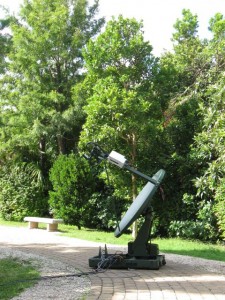 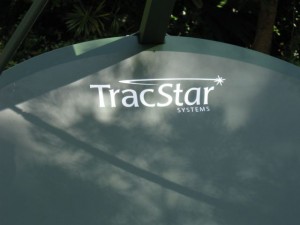