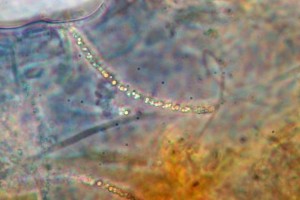 Elemental sulfur granules present in the tissues of sulfur-oxidizing bacteria from a submerged cave in central Florida.

Most life on Earth depends, either directly or indirectly, on sunlight and photosynthesis to generate organic carbon and cellular energy. However, the absence of light does not preclude life, and it is possible for diverse and complex communities to be fueled by microbial chemosynthesis. Chemolithoautotrophic bacteria are microbes that utilize chemicals (chemo) from the bedrock (litho) as an energy source for making their own (auto) food (troph). The bacteria found in the caves we study are chemolithoautotrophs, and they are utilizing sulfur from the bedrock to fuel their life cycle and possibly support the higher order crustaceans, like crayfish, isopods, and amphipods, that also are found here.

While chemosynthetic microorganisms are found in nearly every environment on Earth, they are most abundant in habitats where darkness prevails and competition with photosynthetic organisms is eliminated. Examples include hydrothermal vents and areas of the deep terrestrial subsurface, like caves. Chemosynthetic bacteria can contribute to the generation of biomass in caves. In these nutrient-poor habitats, the bacteria fix CO2 into organic matter via the oxidation of reduced inorganic compounds such as iron, sulfur, and manganese, and actually provide a source of organic matter that fuels growth at higher trophic levels.

Populations of chemolithotrophic bacteria can be found in deep sea hydrothermal vents, and often live in symbiotic relationships with other invertebrates. Tube worms (Riftia pachyptila) and clams (Calpytogena magnifica) who live in association with chemolithotrophs at the bottom of the sea have a unique type of hemoglobin that provides the bacteria with a source of oxygen and hydrogen sulfide necessary for chemoautotrophic metabolism. The bacteria, in turn, provide the worms and clams with nutrition since all digestive system features are absent. It is estimated that these sulfide-based ecosystems in deep-sea hydrothermal vents (black smokers) support over 500 different species of marine organisms.