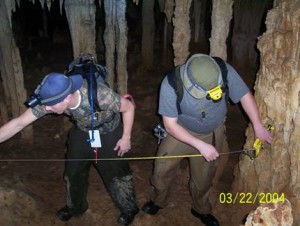 Much of what we know about cave biology, ecology, and hydrology is based on studies conducted in subaerial, or vadose, caves. These caves are commonly referred to as ‘dry caves’ and are filled mostly with air as the bedrock and surrounding sediments are unsaturated. Caves form when water dissolves rock in the vadose zone, leaving behind conduits, passages, and formations.

The water table, or the top of the saturated zone, is the boundary layer between the vadose zone and the phreatic zone. Submerged caves that are completely filled with water are referred to as phreatic systems, and here, the limestone is dissolved in all directions. Access to phreatic caves is often limited, and therefore, we don’t know as much about how life is generated and supported in these environments. 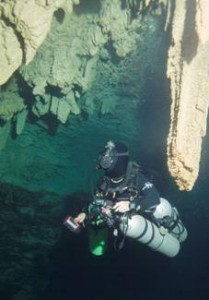 Cave formation, or speleogenesis, usually occurs as a result of water acting alternately on limestone in both vadose and phreatic regions.